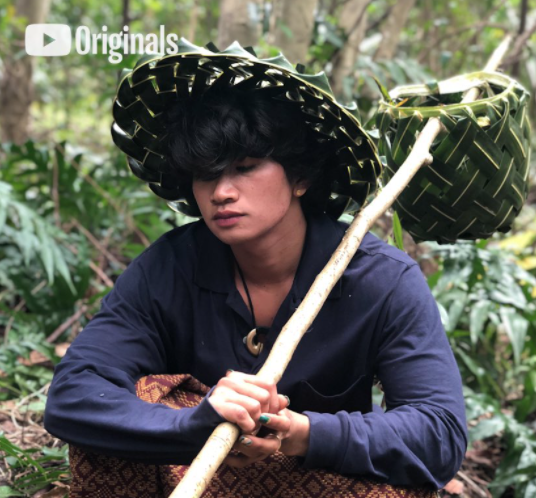 Bretman Rock swapped his glitter for a blade as he spent a week alone in the jungle. The glam star will be learning how to make fire, get milk from coconuts, and climb trees. Will he accidentally set fire to the jungle? Will he make it to the end? And what will he look like if he does? Catch up on the YouTube Originals series below in case you missed it.

Episode 1: Is Bretman Rock Moving to the Jungle?

Bretman Rock is swapping his glitter for a blade as he gets ready to spend a week alone in the jungle. But before he can get there, he has to learn the basics at Boot Camp. Can he make it without makeup and WiFi?

"You know how they say your stomach starts to eat itself? It was definitely that.” Starvation is gnawing away at Bretman Rock so he uses what his ancient ancestors used to learn how to make fire – and watches YouTube.

Bretman Rock is utterly exhausted, delusional, and desperate to get home. It’s his last day in the jungle but he has to make a ten-mile trek to get out. Will he make it out in time?

More popularly known as Bretman Rock is a Filipino-American beauty influencer, social media personality, and internet sensation based in Honolulu, Hawaii with over 20M+ social media followers worldwide. Rock is a beauty influencer as well as a makeup artist. He started as a comedian and meme creator on YouTube and Vine before shifting to vlogs and beauty tutorials. In 2016, one of Rock's contouring videos went viral. He was inspired by vlogger Talia Joy and makeup artist Patrick Starrr.

Bretman's younger sister, Princess Mae is also a social media personality.Princess Mae and her daughter, Cleo frequently appear in Rock's videos, such as for mukbang, In June 2019, Rock was featured on the Pride Month cover of Gay Times. In September 2019, Rock attended his first New York Fashion Week where he collaborated with stylist Andrew Gelwicks.

Bretman Rock, an Ilocano, was born in the Philippines. His father, Edmund Laforga was a fan of professional wrestling and gave him a name based on those of Bret Hart and The Rock. Rock moved to Hawaii at the age of 7 and played sports while growing up including baseball, soccer, cross-country, and volleyball. At Campbell High School, Rock was on the track team.

Rock played the role of "The Playboy" in the ten-episode fourth season of the YouTube Premium web series Escape the Night, released in July 2019. In December 2019, MTV announced that Rock would be the star of the next season of the YouTube show, No Filter. Rock will star in his own MTV's show "Following" on their YouTube channel

Rock was a finalist for the Shorty Award for Breakout YouTuber in 2017. Time recognized him as one of the "30 Most Influential Teens" in 2017, and he was included in the Forbes "30 Under 30 Asia – Media, Marketing, & Advertising" list in 2018. In 2019, Rock won the Beauty Influencer award at the 45th People's Choice Awards. In 2020, he was a finalist in comedy video at the Shorty Awards. In 2020, Rock was included on Variety's 2020 Power of Young Hollywood list.