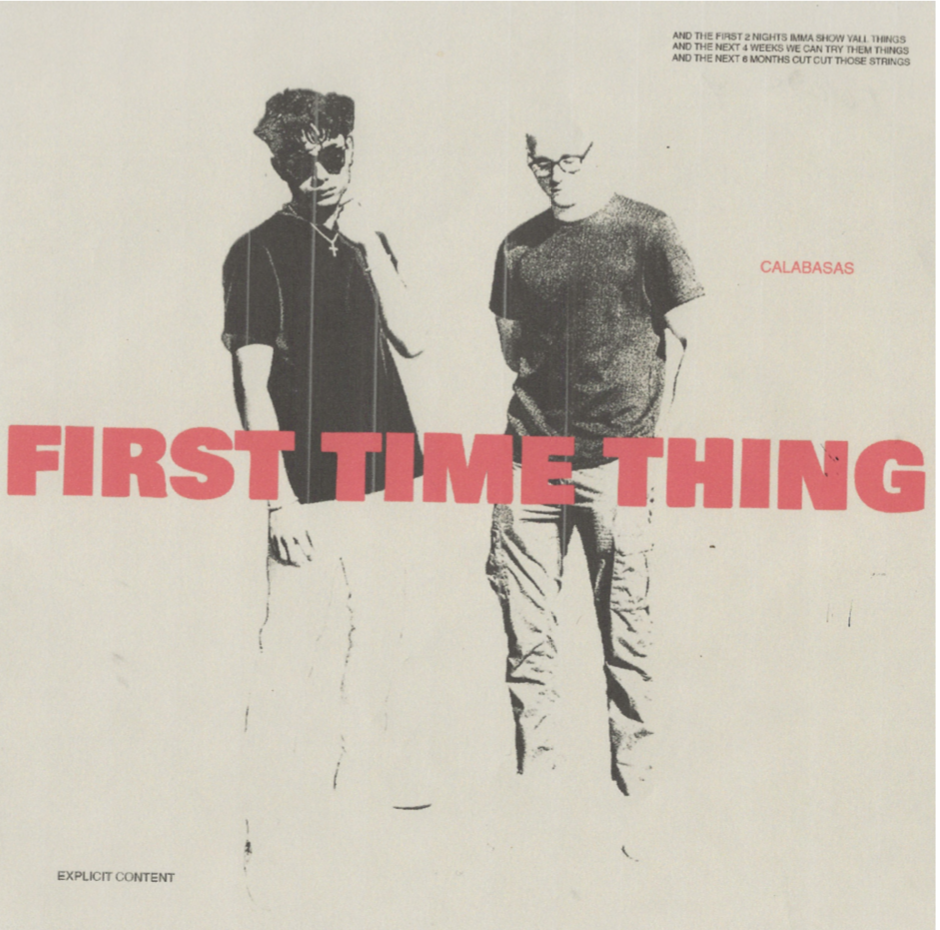 Today, Los Angeles based Pop Duo Calabasas, formerly known as The Image, signed by music mogul Bu Thiam, drops new single First Time Thing via BuVision/The Porter Music Company. Calabasas showcases themselves as an undeniable force entering the world of Pop. To date, the duo has collaborated with artists such as Kanye West, Marc E Bassy, and UnoTheActivist. In this new offering Calabasas delivers a tale of falling in and out of love, cutting strings, solidifying their place as a pop duo to watch this summer. The single with catchy melodies and masterfully penned lyrics shows Calabasas’ ability to create sticky tracks sure to be on repeat for any fan of Hip-Hop or Pop music.

First Time Thing features a soulful sample giving the track huge potential to be an earworm for any listener. Hawaiian/Filipino producer Franskiiz' production is paired with Watrcup’s lyricism and vocal performance makes for a summer smash. The track comes just in time for the ramp up of a summer outside whilst people “cut cut those strings” off their quarantine relationships to be single coming into a wild summer. On the second verse Watrcup lays out the many ways one might cut off a relationship and focus on themselves for a while. Watch the music video below:

“F*ck with me you’ll never be the same, cause you don’t understand that I got options, I stay in LA LA shawtys like a toxin, so it’s so hard for me to stick to one thing”
“In the first two nights I’ma show y’all things, In the next four weeks we can try them things, In the next six months cut cut those strings, cause I always fall in love with a first time thing”

Calabasas in March of 2020 caught the attention of seasoned industry mogul Bu Thiam former SVP of A&R at Def Jam, younger brother of Akon and more recently co-manager to Kanye West. After being taken under the wing of Bu, Calabasas was flown to Cody Wyoming in May of 2020 to write and produce for Kanye West testing their skills as production duo.

In July of 2020 Calabasas released their break out single “Believe In Me” which found its way onto Spotify’s Fresh Finds editorial playlist in the #1 spot just one week after release as well as peaked at #32 on the SoundCloud Top 50 US charts after amassing over 3 million streams. In October of 2020 The Image followed up “Believe In Me” with their infectious single “Beaujolais” which quickly gained the attention of Apple Music and Spotify. The track was placed at #6 on Apple Music Hot Tracks and on Spotify landed on the editorial playlists Signed XOXO #24 as well as Alternative Hip-Hop at #3. In addition the track peaked at #29 on the SoundCloud Top 50 US charts after garnering a whopping 2 million streams in just under a month.

Co-Sign Radio: Calabasas is Back for the Release of "OKAY: An LA Story"
Respect My Region: LA’S CALABASAS RELEASE INFECTIOUS DEBUT EP “OKAY: AN LA STORY”