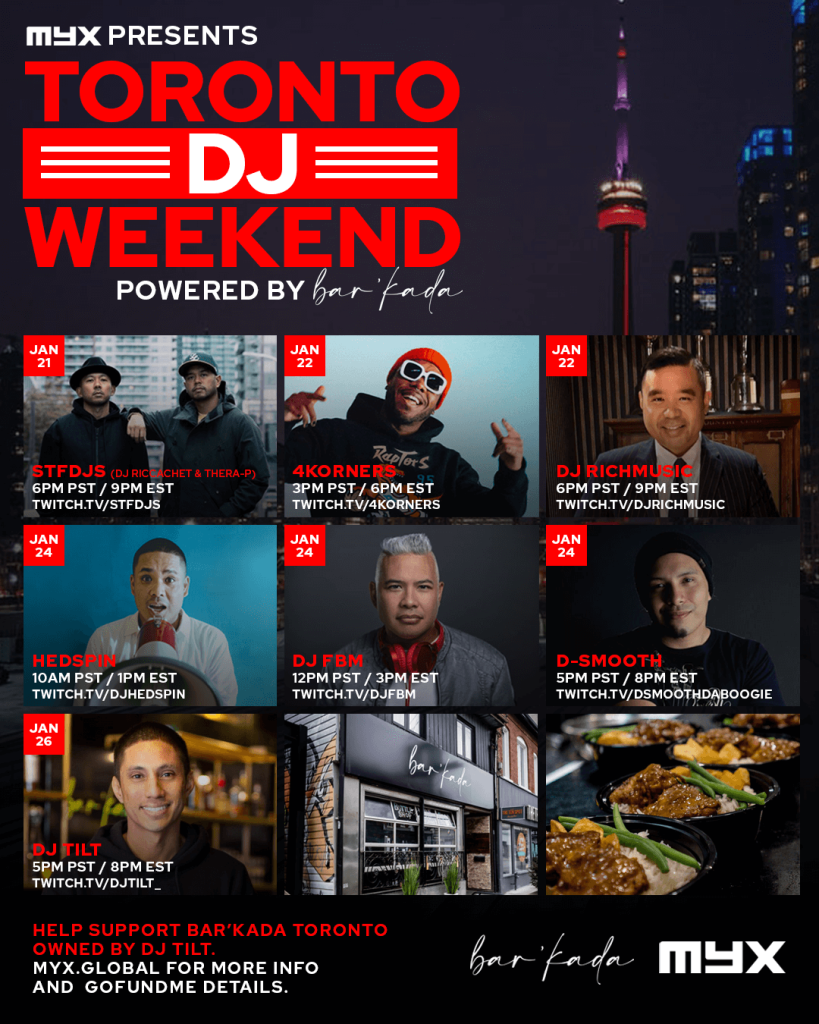 And that’s what friends are for! The Toronto DJ community spins for @barkadatoronto as part of @myxglobal Toronto DJ Weekend—where local DJs corralled to share great music and support @djtilt and his push to keep his restaurant open. Special S/O to @4korners@dj_dsmooth Watch full story and see how you can be part of it!

Support Barkada via take-out order or delivery if you are in the local area.

A true music connoisseur, Jordan “DJ Tilt” Rulloda is quickly rising as one of the most demanded DJ’s not only in North America, but internationally as well. Playing a multi-genre style of music, his mixes include everything from the latest House, Hip Hop & Top 40 tracks with everything in-between from rock to old school. He knows what his crowd likes and he knows how to please their ear and keep them dancing until the wee hours of the night.
A university graduate, DJ’ing was never a career vision. “I just sort of got into it,” Tilt chuckles. “I love to dance & just want others to as well.” “I admire what DJ’s like AM, David Guetta, Calvin Harris and Diplo are doing for music”, Tilt says. “They have a huge following and are exceptional at breaking in new sounds constantly, no matter where they play. That’s what I’m trying to accomplish as a DJ.”

In 2011, Tilt signed with HP (Hewlett-Packard) to be a brand ambassador & Official DJ. He did an ad campaign which was featured in every Cineplex Theater and Best Buy all throughout Canada. His selection of music has been enjoyed by A-list celebrities including Kim Kardashian, Jamie Foxx, Ashley Judd, Jessica Alba, Ben Afleck, Anne Hathaway Lebron James, Dwayne Wade, Carmelo Anthony, Lauren Conrad, Chris Nunez, Brody Jenner & many more. Visit DJTilt.ca for more info.