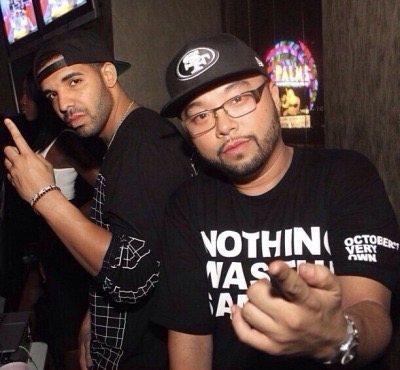 DJ Franzen (aka Frandalay Bay, Franny Pacquiao, Franz Sinatra) was recently named the "All Time Best DJ by Las Vegas Weekly," after spending 19 years in the city. He moved from San Francisco where he was a staple on the top 106.1 KMEL hip hop radio station where he started as an intern at only 13 years old, he bought his first turntables at the age of 12. Originating from San Francisco, California, DJ Franzen has been making monumental moves and breaking records since the early '90s. Franzen's DJ career began in the Bay Area, and has continuously consisted of him introducing listeners to chart-topping hip-hop and R&B legends like Biggie, Jay-Z & Drake in the making.

Franzen personally shared why Twitch has been important for his mental health during the pandemic. Music helps people during difficult times. “Never underestimate the power of music. It’s a blessing to see the DMs when people reach out saying I’ve helped them out from all over the world and I can't wait to travel and meet every single of them,” he says about the support received from his digital community. Music is a passion for him, and people get to see his musical story and career through the livestream platform. Once traveling becomes safe again, he looks forward to visiting Framily globally especially in the Philippines. “It’s all for the love of music.”

DJ Franzen joined myxOLOGY this week to talk about his career, experiences, and share stories about some of the legends in the hip-hop industry. He gave us the raw stories that any music fan would love to hear from breaking Biggie records like "Juicy" & "Big Poppa," scouting locations around the Bay Area for Drake’s music video “The Motto,” why the friendship with Nipsey Hussle was a huge influence on him, to becoming the first DJ to perform with Jay-Z in the West Coast. DJ Franzen’s catalog of stories is endless and he hopes the next generation takes his blueprint and run with it to fulfill their own passions. After hearing all of these stories & some of the footage, the questions is for Netflix & Amazon-how do we make the myx Presents FranCam documentary happen???

The Bay Area to Las Vegas transplant’s residency at Drai’s, has helped make the Cromwell’s rooftop club one of the most prominent destinations in the country. Franzen knows the music never stops, demonstrated by his ongoing quarantine sets on Twitch, consecutively now for 166+ days and every Sunday on Sundrais on IHeartRadio Real 103.9 Las Vegas.

Franzen shares his love for his Framily on Twitch who have turned to his daily live-streams to help deal with depression & other challenging situations during quarantine. He shares stories of his shared Filipino heritage and says on his bucket list is to DJ in the islands one day, his last Philippines trip was in 1982, but he says he still loves Filipino food including chicken adobo, chicken sinigang and named several flavors of the Magnolia ice creams like their Thai Iced Tea and Ube Macapuno as his favorite. We hope to see additional streams of Franzen cooking or eating, he's been an entertaining host and nightly DJ keeping us in good spirits. No matter what we are going thru, we feel he is there for us.

Franny also shared in detail incredible memories with the likes of hip hop legends like Jay-Z, Tupac, Biggie, Nipsey and Drake. He said that Jay-Z (who is a long time friend) is well aware of the Filipino contribution to hip hop and why the legendary rapper references them in songs like A Million, "What are you doing in LA with Filipinos and Eses" and in "Ain't No N*gga, where he raps "Lookin half black & Filipino, fakin no jacks." The lyrics were a conversation starter when they first met, Franny went on to DJ his first live show on the west coast and now a brand ambassador for Jay-Z's Dusse brand after over a decade of genuine friendship.

In this myxOLOGY episode, Franzen goes into detail of how he helped Drake by picking the beat to his hit song, "The Motto," after the duo were listening to several Mac Dre songs. The music video for "The Motto" was shot in the Bay Area and Franny and his manager Jeno helped pick the various locations and put legendary Bay rappers in it like E-40 and Mistah Fab. The song and video helped garner a new appreciation for Drake and his music, specifically on the West Coast and Bay Area.

Franzen discovered Drake on MySpace, after seeing him featured on the MySpace Music homepage, and noticing that he was from Toronto. Drake grew up in Canada, where towns like Scarborough have a high Filipino population that Franzen toured with Drake's Filipino best friend and business partner, OVO Niko, on previous visits.

Drake grew up around Filipinos, which including Niko, that he also mentioned on "The Motto" and is seen in this classic NBA Awards video where Drake impersonates Manny Pacquiao. At the start of his career, Drake references his Fil-Can close group of friends in his "Closer" track that samples Goapele, on his Comeback Season mixtape. Franny shares an exclusive clip on myxOLOGY where Drake is hilariously singing "Forever" in a Tagalog accent, re-naming the song "Foreber."

You’ll have to also check out the myxOLOGY lightning round where he tells us his favorite Frandora Radio R&B and Soul song of all time, DJs he is a fan of DJ Jazzy Jeff, J Espinosa, Umami, and more that he is discovering now on Twitch. DJ Franzen was dropping gems and kept it real all throughout this episode.

We’ll definitely need some merch with DJ Franzen quotes printed on it. Here are some of our favorites:

From the Bay Area to Las Vegas, DJ Franzen has been trailblazing in the DJ community and putting us on new music since the ‘90s. He’s introduced us to legendary hip-hop and R&B artists like Biggie, Jay-Z, and Drake to having a residency at Drai’s Nightclub and now taking his sets to Twitch for over 160 consecutive days. Living in Las Vegas for almost 20 years, he was recognized as Best Local DJ on Las Vegas Weekly’s 2020 All-Time Best of Vegas list. His career so far has earned him various nicknames like “The Boss of Las Vegas,” by the boss Rick Ross, Franzanatra, and favorite
Frandalay Bay - the name that perfectly bridges his Northern Cali & Nevada homes together.