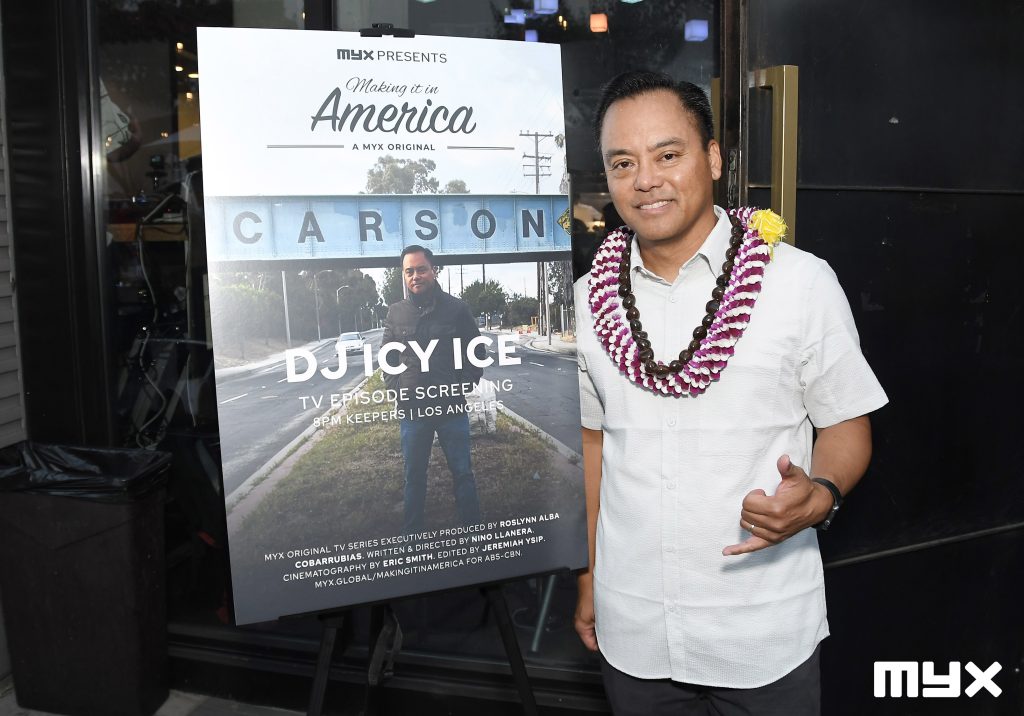 Isaiah Dacio Jr. better known as DJ Icy Ice was born and raised in Carson California. In this episode of 'Making It In America," follow along as DJ Icy Ice and his immigrant parents from the Philippines, recollect Ice’s journey and see how their hard work and sacrifice paved the way for his success as a current member of the world famous @thebeatjunkies & @snapback_live crew. He is a "legend" in the community for co-creating the blueprint for nightlife promotions and DJing within the Filipino community with Legend Ent. and has a strong community of thousands of fans behind him called the "Ice Pack," that watch him stream daily on Twitch. Watch the full episode below:

MYX hosted a special sold-out screening of the episode on Thursday, August 12 at Keepers in DTLA, owned by Filipino entrepreneur & DJ Jay-P. Watch the highlights of the event below:

Ice began playing violin in kindergarten and was surrounded by music at a very young age, a middle school dance sparked his passion for wanting to become a DJ. With his parent's support, they bought him the first half of a Technique turntable set, and Ice and his friends did odd jobs around the neighborhood to save up for the other half. As Ice continued to hone his craft he was met with the challenges of the early 90s which included gang violence, but he stayed focused and became one of the first Filipino American DJs alongside DJ E-man to make it on terrestrial radio in Los Angeles, one of the country’s leading & toughest to get into markets.

Watch the trailer below and on MYX on 8/16 at 7P PDT (8/15 at 10A Manila). Check your local cable TV listings for MYX, or watch online at www.myx.global/livetv.

Making it in America is a new MYX original series that follows the multigenerational, challenging journey of successful Filipino entrepreneurs, artists, celebrities & influencers. The story documents the sacrifice and immigration of their parents & friends from the Philippines that worked hard to help raise them and kickstart their careers. The theme of the show hopes to motivate young creatives to pursue their dreams, inspired by Guapdad 4000's "I'm just trying to make it in America," lyric from his song "Chicken Adobo," produced by !llmind.

As an original member of the World Famous Beat Junkies, DJ Icy Ice has amassed a resume that includes nearly two decades of performing on the world’s biggest stages. Icy Ice’s artistry has been showcased at the largest music festivals, hottest club venues, and celebrity private parties throughout the US, Australia, China, Canada, Dubai, Europe, Japan, Mexico, the Philippines, Sri Lanka and more.

Icy Ice is currently featured as a DJ & Video Mixer on LA’s top-rated radio station, Power 106 as well as doing mixes for Wave 891 in Manila. His mixes are also heard weekly by tens of millions throughout the US and the Philippines via syndication on Superadio. For the past several years, Icy Ice has been expanding the exposure of, “Visual Turntablism,” through a variety of high profile online platforms and can be seen live every Tuesday at StacksTV.net and BReal.TV (Cypress Hill’s online channel).

Icy Ice’s accomplishments include spinning for acclaimed radio stations such as KKBT 92.3 The Beat, 93.5 KDAY, Divine Forces Radio on 90.7 KPFK, and Movin 93.9 FM with Rick Dees in the Morning. Icy Ice has been the resident DJ for Guerilla Union’s “Rock The Bells” Music Festivals and toured as the DJ for legendary Hip Hop artist, KRS-One. A renowned turntablist, entrepreneur and elite party rocker, DJ Icy Ice continues to push the boundaries into the future.