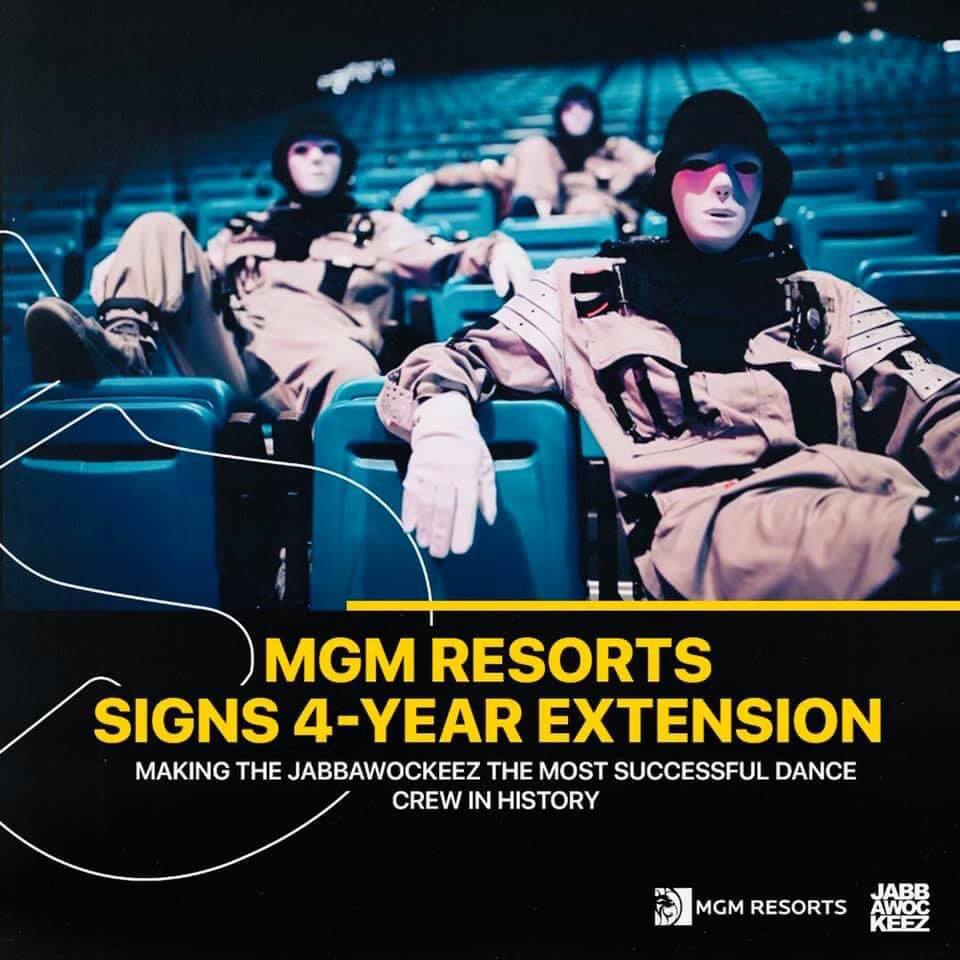 World-famous dance crew Jabbawockeez continues to solidify its legacy in the dance and performance world as MGM Resorts International announced today it has extended the group’s contract at MGM Grand Hotel & Casino through 2025. The four-year extension follows the recent reopening of Jabbawockeez newest show, TIMELESS, in its temporary home at the MGM Grand Garden Arena. Get your tickets here.

Known for their creativity, choreography, athleticism, and intricate synchronization, Jabbawockeez became the first dance crew to headline a Las Vegas theater show when they started at MGM Grand in May 2010. Over the last 11 years, the group has entertained guests at multiple MGM Resorts’ properties with past productions, MUS.I.C., PRISM and JREAMZ, Journey Within as well as the current showTIMELESS, selling more than 1 million tickets.

“Jabbawockeez has been one of the world’s most successful, popular and recognizable dance crews for nearly two decades,” said George Kliavkoff, MGM Resorts’ President of Entertainment & Sports. “We are proud of our partnership with these iconic masked stars and, with this extension, look forward to four more years of their nightly high-energy, entertaining performances.”

Kevin Brewer, founding member and owner of Jabbawockeez, said, “It has been a huge blessing to have the opportunity to share our talents in Las Vegas for the past 11 years. We are deeply grateful for our partners at MGM Resorts who have been very supportive in our growth as performers as well as a successful entertainment brand.”

Joe Larot, founding member and owner of Jabbawockeez, added, “We look forward to the next four years of continued success with MGM Resorts.”

Jabbawockeez continually inspires with positive tropes and their own unique humor, paired with a soundtrack all ages can appreciate. From their first national television appearance on “America’s Got Talent” in 2006 to their win on MTV’s “Randy Jackson Presents America’s Best Dance Crew” in March 2008, Jabbawockeez has proven itself a global trendsetter. The group has stayed connected to the pulse of pop culture, highlighted by a recent appearance on NBC’s “Saturday Night Live” with GRAMMY-nominated artist DaBaby as well as a collaboration with Marshmello.

TIMELESS performances are scheduled Mondays to Sundays at 7 p.m. and 9:30 p.m. nightly. Tickets start at $49.99 (plus tax and fees) and are available for purchase atmgmgrand.com or ticketmaster.com.

For show schedules, to purchase tickets and additional information on the MGM Resorts Entertainment Convene with Confidence plan, which outlines the company’s approach to protecting the health and safety of guests and employees, visit MGM Resorts Open Entertainment.

Jabbawockeez have developed a one-of-a-kind style that has positioned the group as the most influential dance crew in the world, effectively changing the way people view dance entertainment. Known for their creativity, choreography, athleticism, and intricate synchronization, each member of the dance crew brings a different technique and perspective to form the original style that makes the Jabbawockeez so distinct. With their signature look of expressionless white masks and gloves, the performers guide the audience’s attention away from individual identities and towards a unified group. They first gained recognition upon winning season one of MTV’s “America’s Best Dance Crew.” Their fan base grew with their first Las Vegas stage production MUS.I.C., which opened at MGM Grand in 2010 and played to sold-out audiences. Jabbawockeez later moved the production to Monte Carlo where its success continued. Their next production, the colorful and humorous show PRISM opened in 2013 at Luxor. Their production JREAMZ, Journey Within, opened in 2015 at MGM Grand.

Jabbawockeez have won multiple awards including Hip Hop International’s Living Legend Award, Best Family Show, and Best All Ages Show from multiple publications. They have toured the globe, performed alongside legends of the entertainment industry, appeared in film, and have been seen on numerous television shows including “Dancing with the Stars,” “So You Think You Can Dance,” Master of None” and “World of Dance.” Jabbawockeez have provided the featured stage show at Universal Studios Hollywood “Halloween Horror Nights” for the past four years. For more information visit jbwkz.com. Connect with Jabbawockeez onInstagram, Facebook, Twitter and Tik Tok, and visit their YouTubechannel.

MGM Resorts International (NYSE: MGM) is an S&P 500® global entertainment company with national and international locations featuring best-in-class hotels and casinos, state-of-the-art meetings and conference spaces, incredible live and theatrical entertainment experiences, and an extensive array of restaurant, nightlife and retail offerings. MGM Resorts creates immersive, iconic experiences through its suite of Las Vegas-inspired brands. The MGM Resorts portfolio encompasses 29 unique hotel and destination gaming offerings in the United States and Macau, including some of the most recognizable resort brands in the industry such as Bellagio, MGM Grand, ARIA and Park MGM. The Company's 50/50 venture, BetMGM, LLC, offers U.S. sports betting and online gaming through market-leading brands, including BetMGM and partypoker. The Company is currently pursuing targeted expansion in Asia through the integrated resort opportunity in Japan. Through its “Focused on What Matters: Embracing Humanity and Protecting the Planet” philosophy, MGM Resorts commits to creating a more sustainable future, while striving to make a bigger difference in the lives of its employees, guests, and in the communities where it operates. The global employees of MGM Resorts are proud of their company for being recognized as one of FORTUNE® Magazine's World's Most Admired Companies®. For more information, please visit us at www.mgmresorts.com. Please also connect with us @MGMResortsIntl on Twitter as well as Facebook and Instagram.