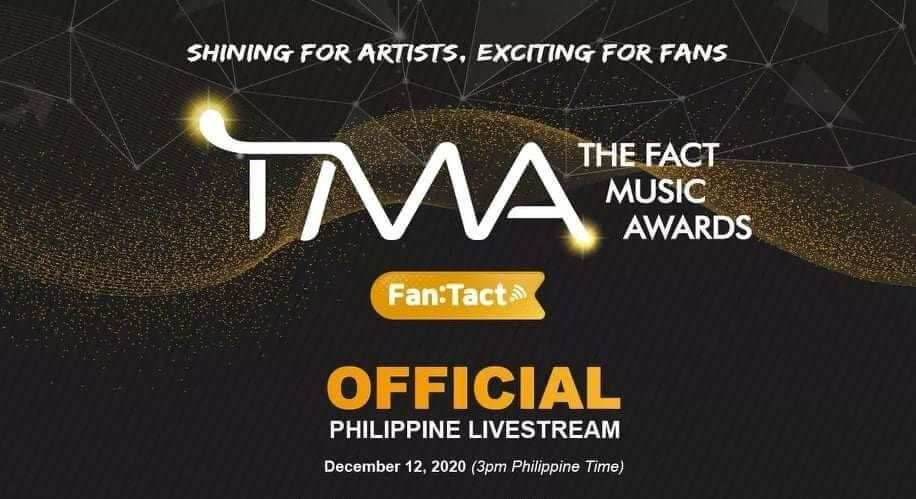 KOREA’S THE FACT MUSIC AWARDS GOES TO THE PHILIPPINES

As KPop becomes more global especially during this pandemic, many idols have already gone into the digital space to host concerts such as BTS’ Map of the Soul ON:E, TWICE’s World In A Day, IZ*ONE’s Oneiric Theatre, even the KCON:TACT Summer 2020 which featured performances from various groups and gathered fan participation worldwide.

With the success of these concerts, The Fact Music Awards 2020 will also be streaming live globally so fans all over the world who are not able to fly to Korea can still see the performances of their oppas, hyungs, noonas, and unnies, cheer for them, and celebrate their winning moments right at the comfort of their own home, KPop shrine, and with their own lightstick at hand.

But even before the actual event, fans can already participate by voting for their favorite idols to win the coveted TMA Popularity Award and FAN N STAR Choice Award categories over at their website and even in their mobile app which is available for download on the Apple App Store and Google Play Store. Voting duration is from November 16 to December 7.

BTS also scored big wins in 2019 with a Daesang and the Listener’s Choice Award, as well as Artist of the Year alongside Super Junior, TWICE, Red Velvet, MONSTA X, NU’EST, MAMAMOO, and Chungha.

Luckily for Filipino Kpop fans, this year’s The Fact Music Awards will also be streaming locally on December 12, 2020 at 3PM Philippine Time (4PM Korean Time). Exclusively streamed via KTX.ph, fans can gain access to a total of four hours worth of content, featuring the red carpet, main program, and the much-awaited performances of all participating artists—all these for only Php 655. Tickets purchased from KTX.ph will only give access to the official Philippine live stream.

Upon purchase of tickets through KTX.ph, fans will receive an email notification which contains an e-ticket and a unique link to the live stream, which will start broadcasting at exactly 3PM local time on December 12. Fans also have an option to talk with other streamers, swoon at their idols together, and spazz their hearts out over the chat beside the streaming window.

Despite the impact of COVID-19 on offline spaces and experiences, The Fact Music Awards 2020 aims to conquer this challenge by using state-of-the-art broadcast methods that will enable the artists to feel the realism and all the fans across the globe to feel as if their idols are performing right in front of them. Because of this, the awards ceremony will also be streamed live in other participating countries such as Japan, China, North and South America, and the rest of Southeast Asia.

Don’t miss out on this chance to see your idols and your bias, even during these uncertain times. For ticket purchases, visit https://www.ktx.ph/events/26942/the-fact-music-awards/. And to participate in all of the fan voting categories, visit https://en.fannstar.tf.co.kr/awards.