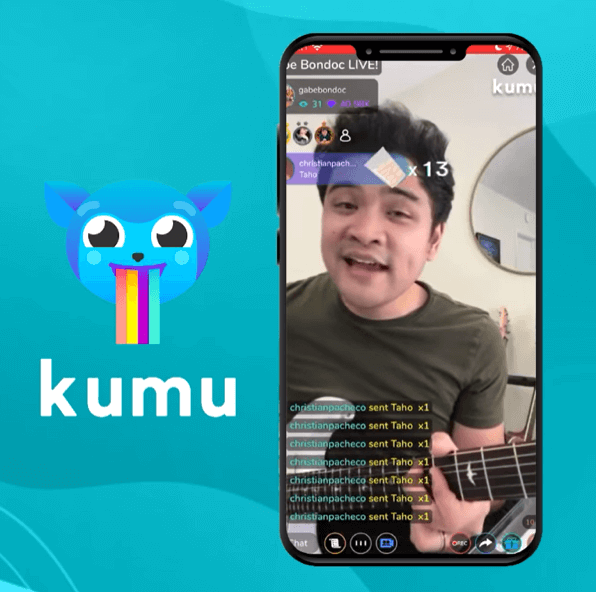 Helping to redefine OPM (original Pilipino music) and catapult amazing Filipino talent to the bigger global stage is kumu and myx, both partnered up to create an exciting new channel on the live-streaming app called @myxglobal.

For the longest time, global audiences – including Pinoys – have equated Pinoys to be talented at just cover songs. But in reality, there has always been a greater, more diverse talent pool of Pinoy artists that sing, write & produce original music of all genres that need international exposure.

Roslynn Alba Cobarrubias, ABS-CBN Global Head of Music & the myx Global Platform, has worked with music industry heavyweights both here and abroad; she aims to change the game for Pinoy artists, opening up another playing field through @myxglobal.

Cobarrubias shares, “There is a misconception of what music from the Philippines or music made by Filipinos sounded like, especially to FilAms, until recently, there were few household names that people could mention by name. But now, there are artists all over the world using their experiences, culture, inspiration, and talent to create a ‘uniquely Filipino’ sound. It’s a fusion of cultural experiences mixed with various influences, sounds, and styles.” As Randy Jackson of American Idol shared, ‘Filipinos are some of the most talented in the world,” whether they are from a singing competition, like Cedrice from The Voice US, or the Manila underground scenes like Syd Hartha. In fact, Cobarrubias says, with Filipino music gaining ground internationally, “The music industry is now slowly equating Filipino to [the term] ‘dope,’ or ‘extremely talented,’ especially to the meteoric rise of GRAMMY award-winning artists like Bruno Mars, H.E.R. & Apl.de.ap of the Black Eyed Peas alongside multi-platinum producers like Illmind & DJ Flict. Stemming from an upbringing surrounded by music, Filipinos are increasingly getting to be known internationally for being amazing singers, recording academy recognized producers & chart-topping songwriters.

Cobarrubias has a deep and passionate connection to Filipinos in music; she’s worked in the mainstream music industry for over 20 years, producing concerts and editorial programs with artists like Justin Bieber, Justin Timberlake, Rihanna, Drake, Eminem, and Jay-Z, among others. “Previously, it was very difficult to find media that would feature our community. There were a lot of misinterpretations of what Filipino artists or talent was, thinking the music would be too niche, or only in Tagalog, and not built for mainstream platforms that was often referenced by music industry executives as “tough to market.”

Before joining the myx team, she admits that she could only name a handful of Filipino artists that she had featured or worked with, like Apl.de.ap of the Black Eyed Peas, Bruno Mars, and Illmind. Indeed, there are thousands of incredible Filipino talent that remains undiscovered, which is why she’s committed to helping artists get into the global spotlight and get the support they need to share their music.

Speaking on behalf of this underappreciated lot, she adds, “As a community, we are a mixed, fusion culture, at the intersection of different influences from where we were born or where we grew up, we are a melting pot of various cultures from Asian to Latino & Black, people are seeing that a lot in music.” She mentions the unique perspectives of Black/Filipino artists and singers like H.E:R., Saweetie, Guapdad 4000, and J Rey Soul, who have a unique mix of Filipino, American & African American culture. “Just like any artist that draws up inspiration from their surroundings, that is what you see with the rise of originality and music from the likes of James Reid in the Philippines to Ruby Ibarra in the Bay Area, to Kolohe Kai in Hawaii. All have very unique sounds, but they are all uniquely Filipino in their own way, and proud of it.”

“In the past, you’ve had artists that felt the need to hide their ethnicity or origin in fear of being type-casted or deemed ‘unmarketable’ by their record labels,” Cobarrubias explains. “But this is changing for the artists as they grow more vocal [in their music] sharing their unique experiences. Guapdad 4000 has talked about his Lola’s superstitions in the Philippines, Saweetie shared the commonality between Filipino & African Americans & being called “Ma’arte” at a young age, while pop star J Rey Soul talked about her love for Filipino food & experiences traveling the world & topping the Billboard Latin Charts with the Black Eyed Peas, in recent @myxglobal myxCLUSIVE LIVE interview shows on kumu.

In addition to the channel, they launched a kumu North America Facebook group powered by myx, a kumu news section on the myx.global website, co-presented events like the 2020 CSUF Friendship Games, & soon you’ll find original content co-created with the 2 teams distributed on the myxTV cable & satellite network in 20M homes, myxRADIO on the Dash Radio station with over 3.1M monthly listeners, & on the first Filipino-American Amazon Prime Video myx store.

“Through kumu, and the rest of our platforms, our mission is to not only highlight the best in Filipino talent worldwide, but also to introduce global artists to the highly engaged Filipino audience of over 120M worldwide. Filipinos are one of the highest performing groups in terms of Spotify and YouTube streaming. Through kumu, the more our quality artists are seen side by side with the best, the more recognition they will gain from mainstream and international audiences on our shows like myxCLUSIVES hosted by DannieBoi & Heavy Rotation by DJ Marlino,” Cobarrubias adds.

Filipino voices deserve to be heard, and now they’ve found another stage. “The possibilities are, indeed, endless, and there’s no better time than now to be unapologetically Filipino. The next generation of creators found a new home on kumu and myx, platforms that allow millions of fans globally of any ethnicity or nationality, to engage & enjoy great Uniquely Filipino content,” she concludes.

Be part of the kumunity now and download the app for free at Google Play or the App Store.