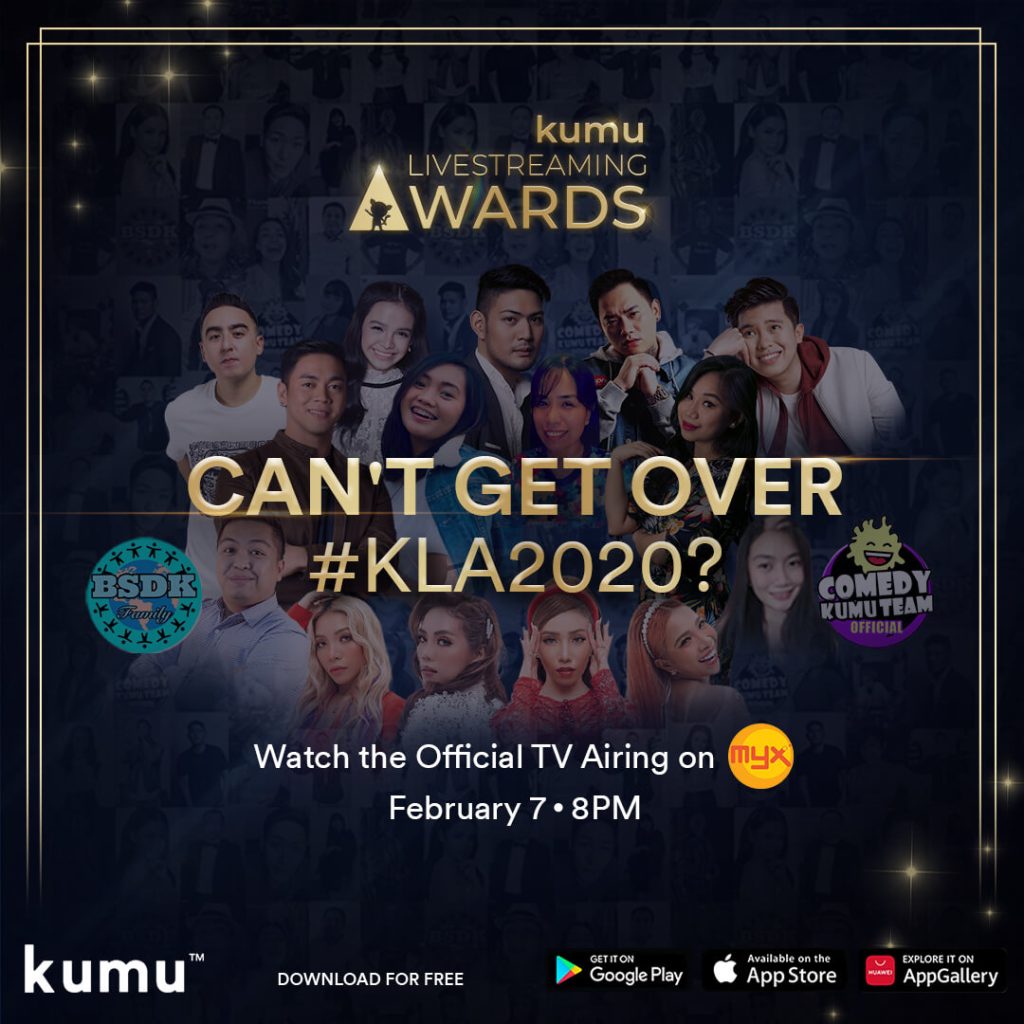 Follow The WINNERS Of The First kumu Livestreaming Awards, Airing on MYX

The results are out!!! The first kumu Livestreaming Awards was an online hit, with more than 27,000 live viewers tuning in for the big night. This was truly an awards show like no other, honoring the livestream talent and creative passion of the Filipino people. No need to worry if you missed it, the rebroadcast will happen in the Philippines on MYX 2/7 at 8P PHT and in the United States on MYX TV & Twitch on 2/14 at 6P PST.

The kumu Awards for Music honors artists and talents with exemplary performance and acts in different genres.

Composer of the Year : @miguelmendoza

Singer of the Year: @zephanieofficial

Hip-hop Streamer of the Year: @djbuddahhh

Best in Campaigns and Missions

The Kumunity Awards for Campaigns and Missions are given to kumu power users with exceptional use of the app in the most impactful manner.

Challenger of the Year: @aze_kurapika

The Kumunity Awards for Gameshows are given to extraordinary kumu gameshow creators and players.

Gameshow Winner of the Year: @chachaismm

The Kumunity Awards for Performing Teams are given to the most notable teams in the kumu app.

Team of the Year presented by Team Manila: @comedykteam

The Kumunity Awards for Streams are given to outstanding kumu livestreamers and talent in the different genres.

Host of the Year: @prettyashlii

Comedy Host of the Year: @amazingbetong

kumu Streamer of the Year: @mmg

Most Engaging Streamer of the Year : @kimpoyfeliciano

The Kumunity Awards for memorable personalities and incredible achievements within the kumu app.

Illustrator of the Year: @selykyle

Gifter of the Year: @jhuiso

Celebrity of the Year: @4thimpact

The Kumunity Awards given to the winners of the most RT-ed on Twitter.

Don’t have the kumu app yet? It’s easy! Download the app at Google Play or the App Store, and start adding to cart! Visit our website kumu.ph for more information and insights into the exciting world of kumu.

You can also follow @kumuph on Instagram, Facebook and Twitter to keep up to date with all the latest events, and surprises from your favorite Pinoy livestreaming platform. Check back here at the kumu blog for more interesting insights into the Kumunity.

Watch the rebroadcast of the awards on MYX Philippines on 2/7 at 8P PHT and in the United States on MYX TV & Twitch on 2/14 at 6P PST.