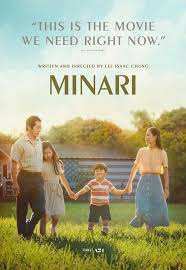 Minari, A South Korean Immigrant Family in America Story, Out 2/12

Minari (Korean: 미나리, lit. 'water dropwort', [minaɾi]) is a 2020 American drama film written and directed by Lee Isaac Chung. It stars Steven Yeun, Han Ye-ri, Alan Kim, Noel Kate Cho, Youn Yuh-jung, and Will Patton. The story is a semi-autobiographical take on Chung's upbringing, the plot follows a family of South Korean immigrants who try to make it in rural America during the 1980s.

The film had its world premiere at the Sundance Film Festival on January 26, 2020, winning both the U.S. Dramatic Grand Jury Prize and the U.S. Dramatic Audience Award. It began a one week virtual release on December 11, 2020, and is scheduled to be released theatrically on February 12, 2021, by A24. It was named one of the ten best films of 2020 by the American Film Institute and the National Board of Review.

Watch the trailer below:

The film was one of 5 that listed in the Goldhouseco Gold List Best Picture honoree & honorable mention list alongside Yellow Rose, The Half of it, Sound of Metal & The White Tiger.