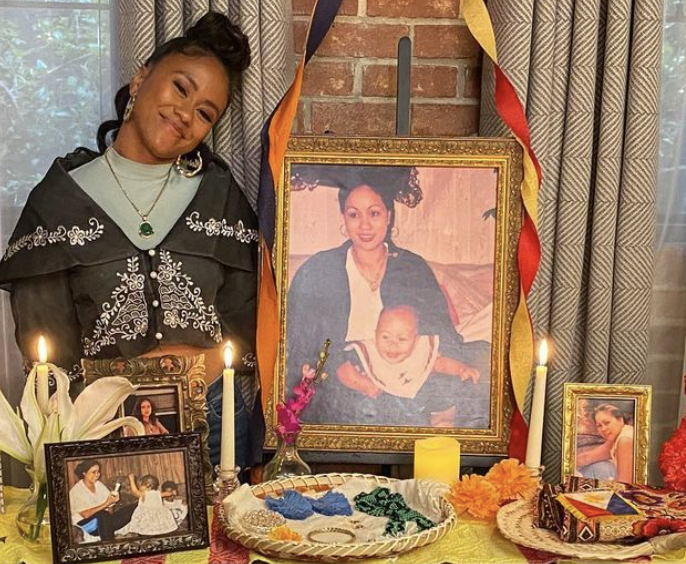 It can't be stressed enough that representation matters and Fil-Am actress Netta Walker feels the same. She co-stars as Keisha McCalla in the spin-off CW series, All American: Homecoming that follows student-athlete Simone Hicks (Geffri Maya) and her friends as they balance being an HBCU student, sports, and relationships. Netta's character Keisha undergoes a tough time in the most recent episode, "Godspeed" as she remembers her Filipino mother's birthday.

Keisha tells her friends that in Filipino culture, birthdays are a big deal even after someone's gone. It's the first time Keisha and her father are unable to visit her mother's grave so her friends band together to research and plan a traditional Filipino birthday celebration.

The friends at fictional Bringston University pull off a dope Filipino family dinner from the food to the table setting and honoring cultural attire. For the celebration, Keisha's friends prepare a kamayan feast with the food laid out on table of banana leaves and where they eat with their hands. If you look closely, the details are spot on with rice, fried fish, crispy pata, fried squid, buko pandan, fresh coconut drinks, and more!

A few of the cast even wore traditional Filipino attire like Peyton Alex Smith who plays Damon wore a Barong Tagalog, and Keisha and Dr. P sported modern embroidered boleros. The tribute to the culture meant a lot not only to Keisha but also Netta Walker. She shares that many tears were shed as her younger self felt loved and seen in a way she never imagined. All the photos used in that scene are of her and her mother who is alive and well. This storyline also served as a healing experience for her younger self as Netta lost her father as a young adult.

Netta adds, "I never thought I'd be lucky enough to tell a story so close to home. Because you actually saw me... a story about a Blasian girl who lost her parent...mahalaga ang representation (representation is important). This story means more to me than I can even begin to express, and this is a moment I'll cherish for the rest of my life."

Both Keisha and Netta represent a person who is half Filipino and half Black who looks to find their identity. The episode tackled the idea of nature vs. nurture and which is more important. Keisha shares that she's Team Nature and although she's proud to be part of a two-culture household, there's part of both cultures she doesn't know about. In the absence of the part she's doesn't know, all the little parts of her identity she does know, make up who she is today which is a powerful message for anyone.