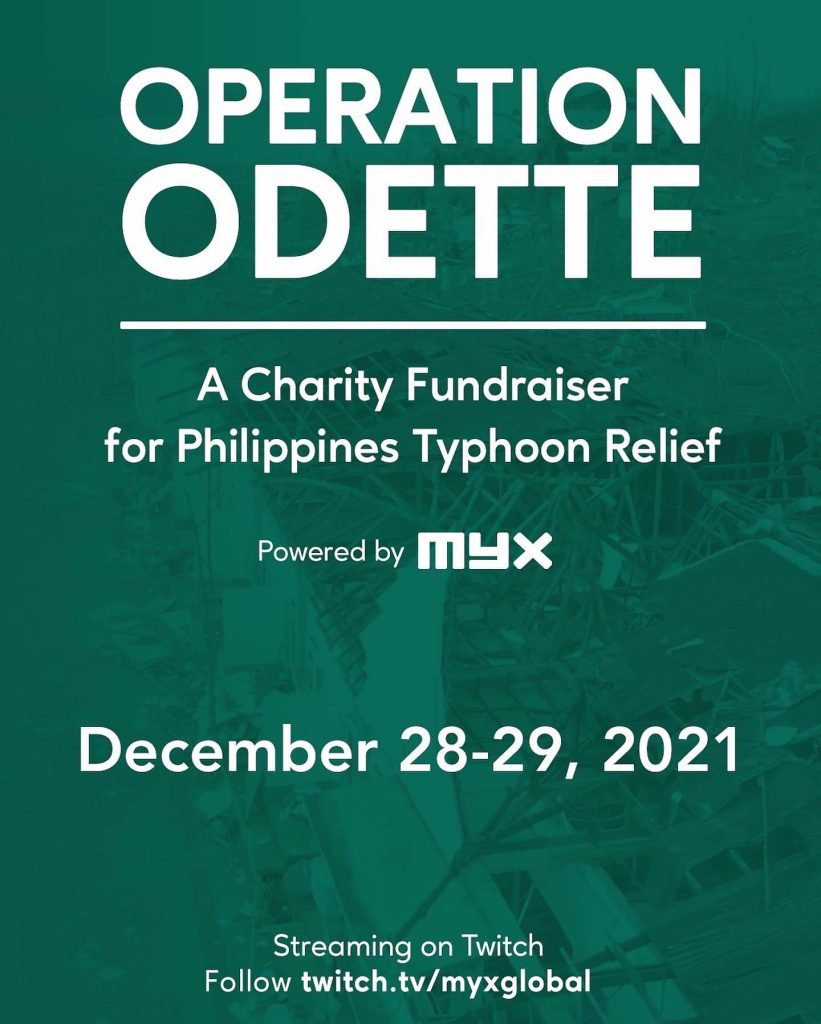 MYX has set up a Twitch DJ charity fundraiser to raise funds for ABS-CBN Foundation International to help support the Typhoon victims in the Philippines. You can donate directly on Tiltify for "Operation Odette" to help their efforts in providing food, shelter, health items, and more.

Photos of the devastation can be seen below, photo credits: @chloelopezwolff & @camillerdp

Join us for a 2-day fundraising charity raid to help the victims of Typhoon Odette. Happening Tuesday, December 28th and Wednesday, December 29th starting at 11 am PST / 2 pm EST on Twitch.

For more info and to donate, visit https://tiltify.com/@myxglobal/operation-odette

Super Typhoon Rai, known as Odette, has recently ravaged parts of the Philippines, leaving people in desperate need of our help. The devastation caused by the typhoon is unfathomable and has hit some of the most vulnerable areas of the Philippines. ABS-CBN Broadcast Journalist Karen Davila shares a video from Kirby Abejaron showing the horrific scenes of the typhoon wreaking havoc in Siargao's newly built sports complex where people were taking shelter.

Other ways to donate:

Service to the Filipino people with the highest standards of excellence, compassion, integrity, and accountability is the heart of ABS-CBN Foundation International (AFI).

AFI is a 501(c)(3) non-profit, non-governmental organization dedicated to improving the lives of disadvantaged Filipino families in the Philippines and around the world. AFI strives to become a major social change partner for the Philippines through multi-sectoral projects and partnerships in areas essential for building brighter future.

AFI serves as the public service arm of The Filipino Channel (TFC) and the umbrella department of all corporate social responsibility activities of one of Asia’s biggest media conglomerate. AFI is a committed advocate of public service and accomplishes its mission through supporting the programs of ABS-CBN Lingkod Kapamilya Foundation Inc. (ALKFI) in the Philippines.

Using the power and reach of media that stimulates creation of critical multi-sectoral partnerships, AFI will continue to rally Filipinos and like-minded individuals to support and fund child care, disaster management, and environment conservation. AFI strongly believes that the three core programs will help realize a bright future for our Kapamilyas that will become the hope for tomorrow.