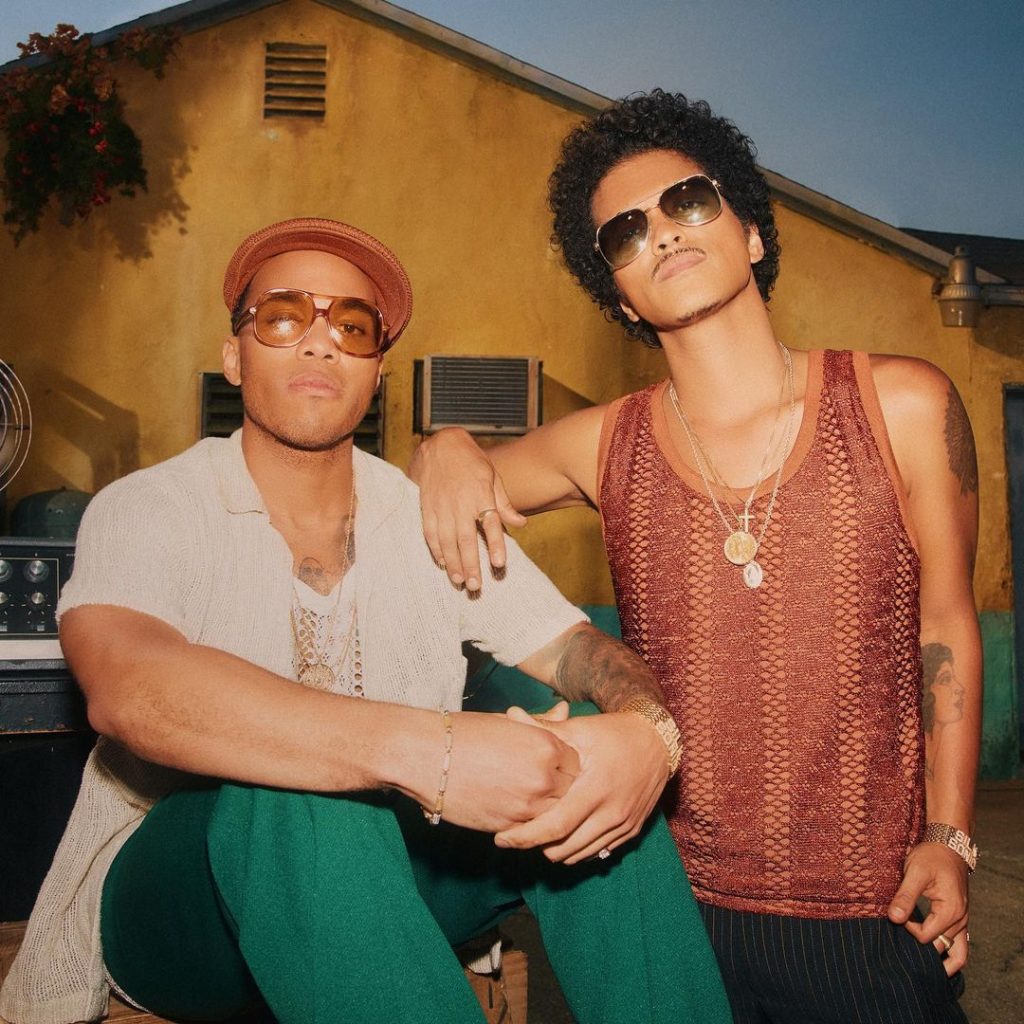 Silk Sonic's music is certified silky, smooth, and fresh. Bruno Mars and Anderson .Paak, the duo making up Silk Sonic sits down with Rolling Stone to talk about the upcoming LP An Evening with Silk Sonic and how their group and music came into fruition. Rolling Stone looks into their friendship, creative process, and their quest to bring back "old school sound" music. Check out the highlights from the feature!

The LP, An Evening with Silk Sonic release is pushed back to January 2022.
The LP was originally expected to release fall of 2021, but Mars and .Paak decided to put out more songs instead. Leave the Door Open, the first single released by the duo caught everyone's attention and left us wanting more. The LP was pushed back not because of a delay, but the intent was to let songs sit and simmer with listeners. Mars explains, "letting each one [single] breathe a bit, before dropping the LP in full." It's easy to get in binge-mode and not fully grasp an experience because everything's available at once. Just like a sip of wine (sip, sip) you have to savor it a bit.

Leave the Door Open is the intro to Silk Sonic's sound
Silk Sonic is a passion project for the superduo. .Paak says the single is their mission statement. “It’s the intro to the book, to set the tone and let you know the sound. There’s different kinds of waves, but the whole album is wrapped around that.” In order to re-create the Sixties and Seventies soul and funk atmosphere they along with Mars’ longtime engineer, Charles Moniz “did the research” to “get the right things...how much the right guitar pick matters. The right gauged strings. All this science kinda stuff.”

Some of the influences they looked to for inspiration included legends like: Aretha Franklin, James Brown, Miles Davis, Stevie Wonder, and Prince. Of course, their Silk Sonic team also made the project possible with multi-instrumentalist Dernst “D’Mile” Emile, one of .Paak and Mars’ core collaborators; Dr. Dre, who listened and gave feedback along the way; Homer Steinweiss of the Dap-Kings, who contributed drums to one song; Bootsy Collins who gave the name Silk Sonic and deemed the project's spiritual godfather.

The creative process is different for Bruno Mars, "the math professor" and Anderson .Paak's "free-form"
What started as a joke between two friends eventually became Silk Sonic. Both artists have insane musical talents and are born to perform. So what happens when you put them two in a studio together? You get a No. 1 hit. .Paak says that Mars approaches pop like technician, calling him "the math professor." He’s thinking about every aspect of the song, the math of it all. It’s deeper than just talking slick, or good drums, or anything like that — it’s ‘What are we talking about, what are we trying to say, what does this look like, and how are we gonna kill ’em on the hook?’” As for .Paak's style, he approaches tracks in a more fluid, intuitive, worm’s-eye-view kind of way, “I’m more free-form — ‘What’s the vibe?’

"Jibb talk" started it all with the idea of turning jokes into songs
“I was opening for the 24K Magic tour,” .Paak recalls, “and a week in, we were in the studio.” “Real quick!” Mars says. The friendship on tour translated into songs after tour. One of their reasons to collaborating was to take cherished backstage in-jokes “jibb talk” and make them into songs. .Paak explains, it's “BS with a smile — we just talk all day and do bits. But it’s all from the heart, because we’re writing from our experiences, from our relationships — it’s rare that two men can come together and talk about love.”

Creating Silk Sonic became an escape
The passion project was created during the pandemic not only for the two artists, but try to bring joy to people. Mars says, "especially in times like the time we’re in right now. For me? I know I wasn’t listening to any depressing music. We’re already in a weird spot...I want the escape!” Just like us, their busy schedules with performances, tours, and travel all just stopped. .Paak mentions he's not sure it would have happened if it wasn't for the pandemic. A project like Silk Sonic was their way to cope with things. With all the despair and chaos happening, they coped the only way they knew how and that's through music.

Mars and .Paak share gems in this piece like any good song can bring people together and Silk Sonic has been doing that during this crazy time. We all get excited when there's new music coming or a surprise drop like Skate because it becomes our escape even for just three minutes and twenty-four seconds. Mars acknowledges their role as entertainers, "if it makes us feel good, and resonates with us, that’s gonna be infectious and make other people feel good — and that’s our jobs as entertainers.”