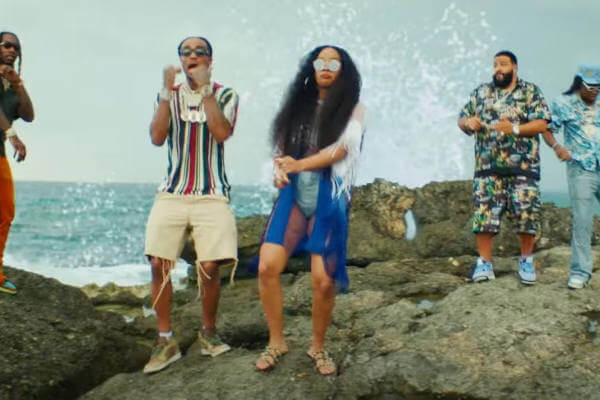 DJ Khaled Brings the Island Vibes on "We Going Crazy" with H.E.R. and Migos

Right off the bat, DJ Khaled's latest track We Going Crazy puts a reggae spin to his usual hip-hop style. It's ANOTHER ONE that's sure to top the charts. Grammy-winning artist H.E.R. kicks off the track with her smooth vocals while Grammy-nominated Migos comes in with the punch in the verses. Although H.E.R. and Migos are features, they're definitely heard from the beginning to the end.

The music video just premiered and matches the vibe of the song. The crew are seen living it up at the beach and waterfalls, but also having a feast. They also be going crazy taking a scavenger hunt around the beach until viewers see they're actually stranded.

ABOUT DJ Khaled
DJ Khaled is an American DJ, record executive, record producer, and media personality. He produced 11 studio albums of his own since 2006, and in 2017, he earned his fist No. 1 Single with I'm the One off of the album Grateful. In 2009, he was the president of Def Jam Records South and co-founded the We the Best Music Group record label. As a music producer, he collaborated with artists like Lil Wayne, Jay-Z, Mariah Carey, Beyoncé, Justin Bieber, Kanye and Nicki Minaj.

ABOUT H.E.R.
Gabriella Sarmiento Wilson better known professionally as H.E.R. is a multi-GRAMMY Award winning American singer and songwriter. She was the first pinay nominated for “Best Song” at the Golden Globe Awards with Fight For You from the film, "Judas and the Black Massiah". In 2021, H.E.R. won the Oscar in the category Best Original Song for Fight For You.

ABOUT MIGOS
Migos was formed in 2008, by Quavo (born Quavious Keyate Marshall), Takeoff (born Kirshnik Khari Ball), and Offset (born Kiari Kendrell Cephus). They originally called themselves the Polo Club. The three members are family and were raised together. Quavo is Takeoff's uncle, and Offset is Quavo's cousin. In 2013, Migos released their commercial debut single Versace from their mixtape Y.R.N. (Young Rich Niggas). In 2017, their second album, Culture, debuted on the US Billboard 200 chart. Culture II debuted in 2018, giving the group their second number one album in the United States.