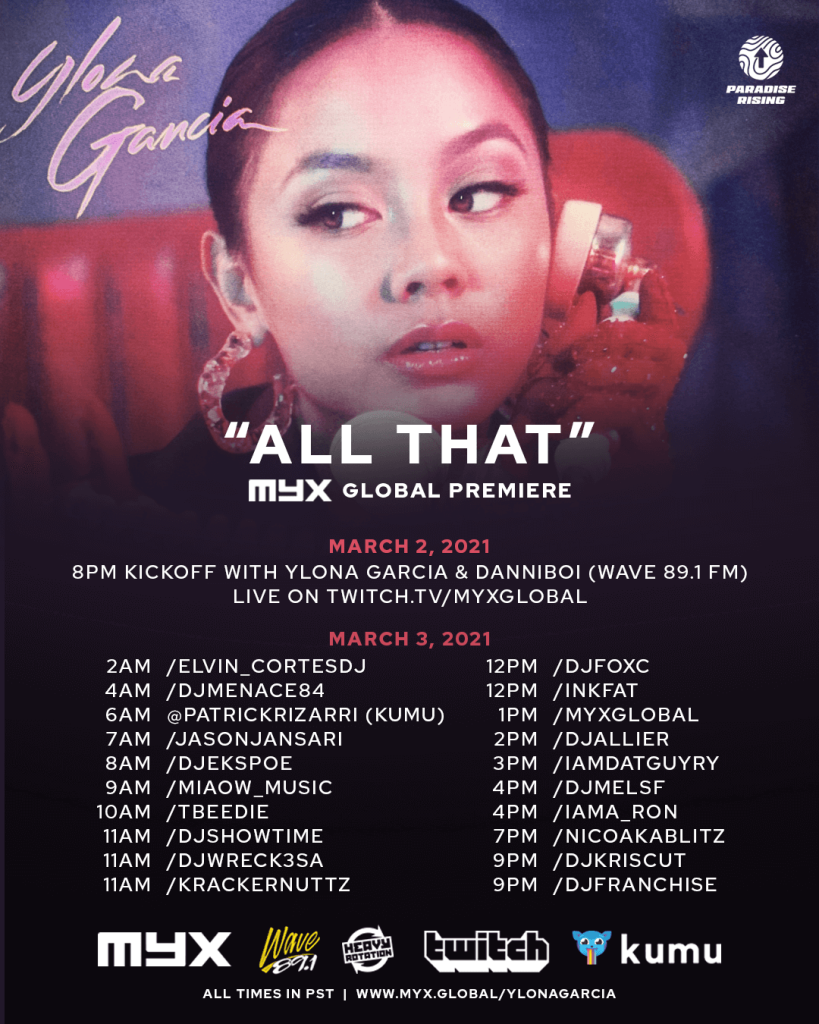 Pop & R&B Ylona Garcia is prepared to take the world by storm. The Filipina-Australian R&B-Pop singer partnered with another power house to take on the global stage. She is the latest signee for 88Rising's sub-label PARADISE RISING. Together, they released the single, All That. You'll hear the growth in her music and more of a dance track. With the song, Ylo's ready to leave "All That" Sh*t behind from the past year and tackle a new direction.

Check out what she has to say about the song, teaming up with PARADISE RISING, and her birthday greeting from Disney's Raya and The Last Dragon stars, Awkwafina and Kelly Marie Tran.

1. Ylona's been keeping her collab with 88Rising and PARADISE RISING a secret since last year
Last time she chatted with Dannieboi, the wheels were in motion for this insane collab. Holding out on us, this all came as a huge surprise. She was putting in the work, both working at McDonald's (aka Mackers in Australia) and going to the studio to record. Everything was set in stone last summer. After that, Ylona headed straight to the studio to listen to demos and record music.

2. All That became an outlet for Ylona to leave all the toxicity behind
Ylo explains the track is about "letting go of all the toxicity you’ve experienced, were exposed to, and you’ve produced yourself". She goes on to say it's also about starting new and fresh and leaving all the sh*t behind. It encourages someone to become the best version of themselves.

3. Partnering up with 88Rising and PARADISE RISING was an easy decision
When signing on with 88Rising, it was kind of a no brainer for Ylona. The reason she signed on with them was "because they're really cool." It was easy to work with their team and they're nice people. Some whom she says are also now friends. She worked with top producers who've worked with names like the Jonas Brothers and The Chainsmokers! "We just all vibe together and got along well."

According to Flaunt.com, "All That was created alongside Peter Hanna (Jonas Brothers, The Chainsmokers, Lindsey Stirling), and GRAMMY-nominated Michael Fatkin (Nathasha Bedingfield, Hillsong United) who helped shape the sonic landscape around the song." This song marks a new chapter for Ylona and her career.

4. Ylona looks to inspire others through her music
She explains that "sometimes it takes a while to write a song... but this session literally took 2 hours to complete over Zoom". Sometimes the best songs come really quickly for artist and this is the case for All That. When 88Rising asks her why she's doing this, Ylona didn't always have an answer. Then she remembers why she's a fan of other artists. They inspire her. So now, Ylona is looking to inspire others the way other artists have inspired her. She aims to help others get through and work hard to where they want to go.

5. Getting a birthday greeting from Awkwafina and Kelly Marie Tran is just as cool as dropping your own single on your birthday
MYX Global host Nico Blitz sat with Awkwafina and Kelly Marie Tran to talk about their latest film, Disney's Raya and The Last Dragon releasing on Friday! They both were quick to talk about their love for pancit and mention how talented Filipinos are at singing and dancing. So then we had to ask if they'd be up to sing Happy Birthday to Ylona. Ylo was shocked because she just saw Crazy Rich Asians the day before where Awkwafina was a lead and loved her character on screen & who she is in real life. Check out how they did below!

Tell us what you think of Ylo's latest track All That using #AllThatYlo on social!