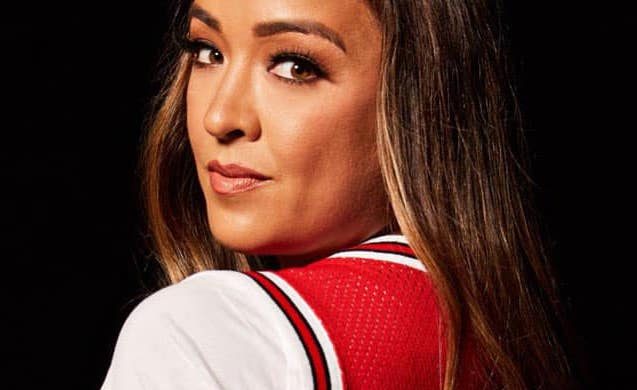 We're halfway through FAHM and we're not slowing down with these spotlight profiles. This week, we're kicking off with Cassidy Hubbarth who you may have seen on TV and online as an ESPN Anchor and Host. You've seen her frequently on televised NBA games as a sideline reporter chatting with players and coaches during timeouts, halftimes, and post-game. Lets get to know her more with these facts.

1. Cassidy Hubbarth is of Filipino and European descent
The Illinois native is of Filipino descent from her mother's side and German and Irish descent from her father's side. In high school, Cassidy was a three sport athlete for four years and part of the 2002 ETHS State Championship high school soccer team. One of the coolest anchors is also one of the biggest Chicago Bulls fan.

2. She began her career in news before becoming a sports anchor
After graduating from Northwestern University with a degree in Journalism, Cassidy became a traffic reporter and producer for WMAQ NBC5 Network in Chicago. From there, she entered the sports industry and became a host and reporter for the Big Ten Network and Fox Sports South, where she won a Southeast Emmy for Interactivity for her work on SEC Gridiron Live.

3. Cassidy now serves as a full-time reporter for different ESPN outlets
Before covering ESPN NBA games as a full-time sideline reporter throughout the regular and playoff seasons, Cassidy also was a regular host for college football and WNBA studio host for ESPN and ABC. When she's not an in-game reporter, she also lead ESPN's digital show, Hoop Streams which is a pre-game analysis and preview to upcoming NBA games. Other shows Cassidy is also involved in includes: Get Up, SportsCenter, First Take, The Jump, and NBA Countdown.

4. Cassidy was grinding during the NBA bubble as an anchor
Even the sports world was put on pause and later resumed within a secured environment last NBA season because of the pandemic. However, when the NBA bubble became a successful alternative to a regular season, Cassidy was in the midst of it all as one of the few reporters invited to anchor. She recorded her experience through an Instagram vlog called, Bubble Diary where she talked about the bubble, historical moments that happened on and off the court, and how the NBA created a whole new game.

5. Cassidy chatted with Jordan Clarkson about the Yum Yum Food Truck
She isn't one to shy away from topics other than sports. In an episode of Hoop Streams, Cassidy shed light on the actions of Jordan Clarkson and how he helped the Utah food truck, Yum Yum Food Truck get back on its feet. Cassidy spoke up that even if these racial attacks are no longer making headline news, it's still important to talk about how it's happening. She continues to hope that more people will keep paying attention and do their part to help others.

Catch her on ESPN and its various outlets!