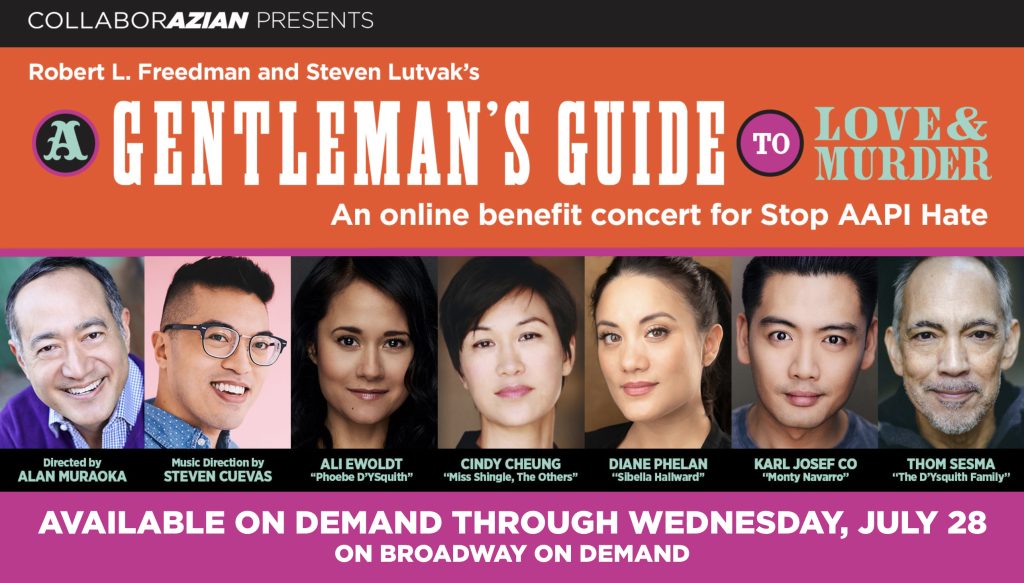 The Production of "A Gentleman’s Guide to Love and Murder" Raises over $25,000 for Stop AAPI Hate

The show has been extended through Wednesday, July 28 due to its overwhelming response and is available to stream now on Broadway On Demand.

CollaborAzian’s production of A Gentleman’s Guide to Love and Murder premiered last week on Broadway On Demand to wide success. The all-Asian American production of the Tony Award winning musical set to benefit the work of Stop AAPI Hate and has raised over $25,000 to date.

The success of the production supports the demand for Asian American led shows on stage and the virtual show has been extended through Wednesday, July 28th on Broadway On Demand. CollaborAzian plans to produce more shows in the future to highlight Asian American talent in theater.

"I loved this performance of "A GENTLEMAN'S GUIDE", I just loved it. I am enormously proud that this was the vehicle to raise money and support for such a great cause,” says Steven Lutvak, Co-Lyricist and Composer of the original Broadway production. “Brilliant performances, a beautifully crafted evening and a total delight. I hope to see more Asian American led productions like this in the future."

Violence and hate toward the Asian American and Pacific Islander communities have become more common since the COVID-19 pandemic began. Organizations such as Stop AAPI Hate have emerged to help communities unite against racism.

“Once we can tell the story through data, we can create and implement community and policy solutions to help address it — and tell a new story: a story of resilience, says Stop AAPI Hate Coalition. We honor AAPI-led creative groups, such as CollaborAzian, for helping tell these new stories.”

CollaborAzian’s A Gentleman’s Guide to Love and Murder is available to stream through Wednesday, July 28 on Broadway on Demand.

About CollaborAzian’s A Gentleman’s Guide to Love and Murder

CollaborAzian’s A Gentleman’s Guide to Love and Murder will be helmed by theatre and television director Alan Muraoka, who has played Alan, the owner of Hooper's Store on Sesame Street for the past 23 years. He most recently played Iago in Disney's Aladdin on Broadway, and starred as the Engineer in Miss Saigon. The all-Asian American cast will star Cindy Cheung (13 Reasons Why), Karl Josef Co (Pacific Overtures), Ali Ewoldt (The Phantom of the Opera), Diane Phelan (School of Rock), and Thom Sesma (Sweeney Todd). Steven Cuevas (Once On This Island) serves as music director.

A Gentleman’s Guide to Love and Murder won four Tony Awards at the 68th Tony Awards in 2014, including Best Musical.

About Broadway On Demand