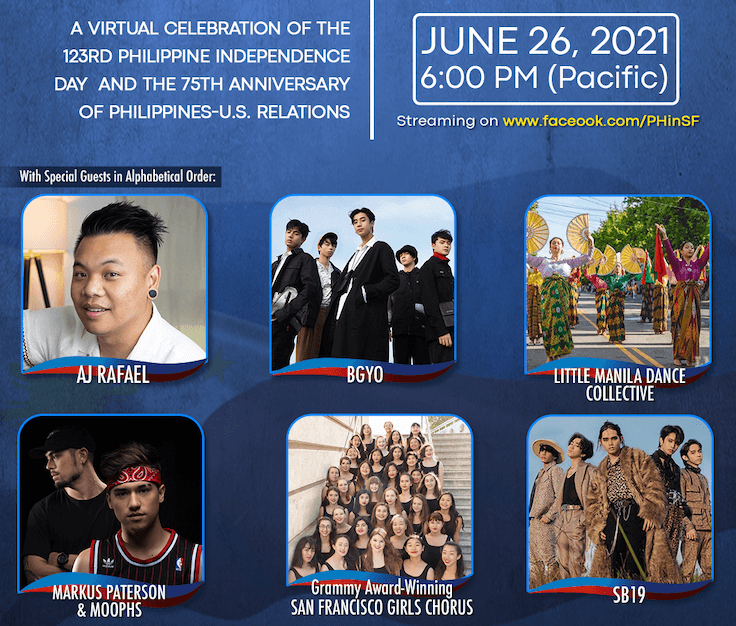 History will be made with this all star line-up at an international celebration!

WHAT: The Philippine Consulate General in San Francisco, ABS-CBN TFC and MYX are preparing a musical extravaganza to honor the 123rd Anniversary of Philippine Independence and the 75th Anniversary of the Establishment of Diplomatic Relations between the Philippines and the United States.
Beyond honoring the milestones, the concert highlights the partnership between and among peoples, including the Filipino American communities, as well as government and private entities, which make for positive contributions amid current challenges.

WHEN & WHERE: On June 26, 2021 at 6 PM Pacific Time, the exciting presentation dubbed, “Kalayaan 2021: Celebrating Partnership and Humanity,” featuring talented Filipino and American artists and timely messages of Philippine and U.S. officials, will premiere on the Consulate’s Facebook account facebook.com/PHinSF. On June 27, the concert will air on iWantTFC, TFC on IPTV, as well as TFC and MYX on July 11, on cable and satellite globally. You can also view on the MYX website under “LIVE TV.”

WHY: “We have seen that the spirit of bayanihan continues to be alive and well, in partnerships between governments and private organizations, among communities, between those who are able to help and those who need help, between and among peoples. Here in the United States, we have seen the power of both partnership and humanity -- which is the theme of our concert,” said Consul General Neil Frank R. Ferrer of the Philippine Consulate of San Francisco.

WHEN & WHERE: On June 26, 2021 at 6 PM Pacific Time, the exciting presentation dubbed, “Kalayaan 2021: Celebrating Partnership and Humanity,” featuring talented Filipino and American artists and timely messages of Philippine and U.S. officials, will premiere on the Consulate’s Facebook account facebook.com/PHinSF. On June 27, the concert will air on iWantTFC, TFC on IPTV, as well as TFC and MYX on July 11, on cable and satellite globally. You can also view on the MYX website under “LIVE TV.”

WHO: For this special occasion, ABS-CBN TFC, MYX, the Philippine Consulate General and Sentro Rizal San Francisco, with the support of the National Commission for Culture and the Arts and the Philippine Center Management Board, are proud to present talented performing artists who will showcase Philippine culture and heritage:

• Grammy Award-winning San Francisco Girls Chorus - is San Francisco’s premier girls' choral group. They have a newly commissioned choral opera titled, “Tomorrow’s Memories, A Little Manila Diary,” which is based on the diary of a young Filipina immigrant who matured and chronicled the lives of her Filipino compatriots from the plantations of Oahu in Hawaii to the Central Valley in California.

• SB19 - is a five-member Pinoy Pop (P-Pop) Group and the first Filipino group in Billboard’s Next Big Sound Chart as well as the first Southeast Asian Act to enter the top 10 of Billboard Social 50 Weekly and Year-End Charts.

• AJ Rafael - is a Filipino American singer-songwriter who has a huge following on YouTube and TikTok for his live musical performances. He graduated in 2010 from the Berklee College of Music with a degree in songwriting.

• BGYO - is a P-Pop group that debuted this year with their single “The Light.” They are one of the first Filipino artists to appear on the weekly Billboard Next Big Sound chart.

• Jessica Sanchez - is a Filipino American singer-songwriter and a runner-up on popular talent search American Idol.

• Markus Paterson and Moophs - is a Filipino-British actor & singer, most recently seen in the film, “Hello Stranger, The Movie.” Moophs (Chris Lopez) is an award-winning producer/guitarist & founder of Tarsier Records. Both have garnered millions of streams on Spotify with their latest releases.

•  Soleil Tropicales - Soleil is the Tourism Attaché of the Philippine Department of Tourism in San Francisco, which has jurisdiction over Northwest and Midwest USA and West Canada. She enjoys singing and performing for kababayans.

• Beatriz Abella - Filipino American Beatriz was born and raised in Alaska and is now based in Oregon. She studied Music and Business Administration and has performed classical and musical theatre repertoire in San Francisco, Seattle, Germany, Mexico, the Czech Republic, and at a variety of venues including the Oregon Cabaret Theatre and New York City’s Carnegie Hall.

• Fatima David - Filipino Pakistani American Fatima is the Global Philanthropy Chair for Aspacforce at Salesforce, supporting and inspiring her Asian and Filipino colleagues in the company to make a positive contribution to their communities.

• Little Manila Dance Collective - is a Stockton-based dance group working to promote
and preserve Philippine culture and heritage through their performing arts.