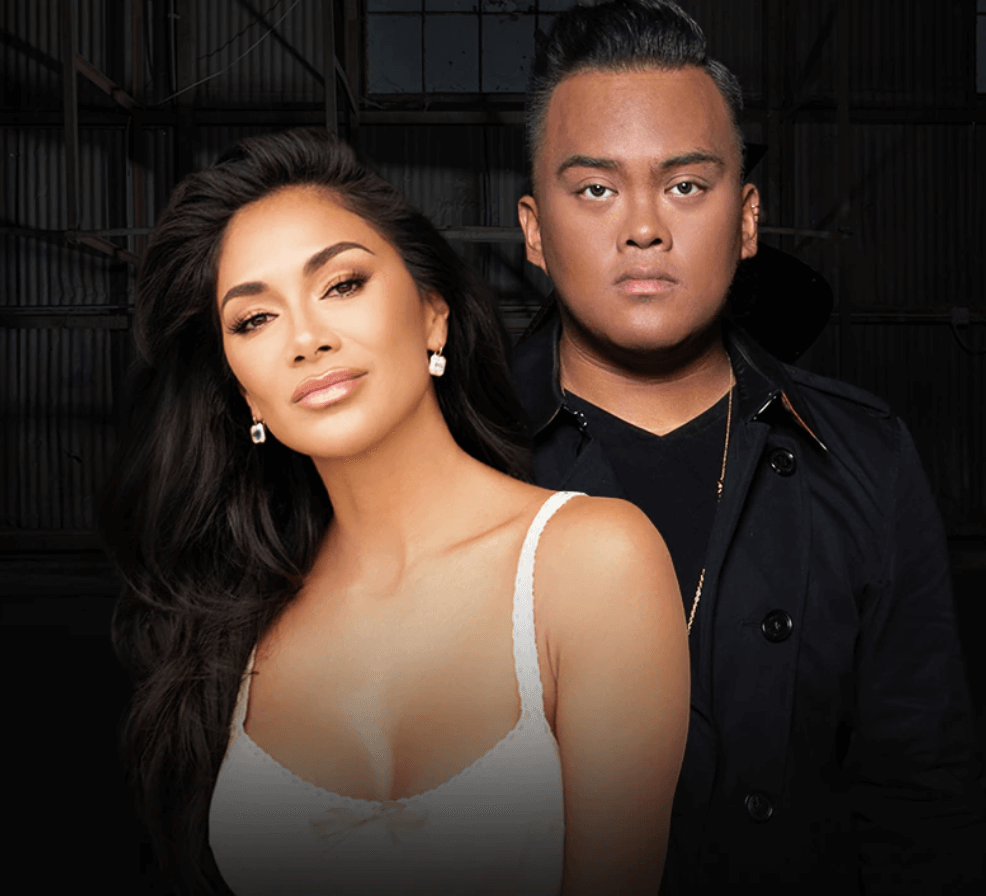 In our MYX Global exclusive interview with TV Host/Artist Nicole Scherzinger, she dished on how she would go past the Black Eyed Peas dressing room when she used to tour with them singing their song "Weekends," apart of the WB reality show winning girl group, Eden's Crush. She eventually went on to join one of the biggest selling girl pop groups of all time and shows love to Fergie and fellow pinay J Rey Soul (Jessica Reynoso) currently singing lead with the group and killing it. J REY SOUL was recently nominated for a Latin Music Award. Below is a quick clip of Nicole talking about never trying Filipino food, we hope to bring her chicken adobo on the date of the new Guapdad 4000 "1176" album, 3/19.

Tune in Wednesday 6P PST 3/10 before OTWOL Episode #6 on MYX to watch the full interview with Nicole and Troy Laureta below:

For the first time, the superstar sings in her native Filipino language on Troy's new OPM album, Kaibigan out on Star Music. She shares stories of how they met through iconic musical director David Foster, the process of recording the difficult song, what it means to be a representation of us all in the entertainment mainstream having her unique skin color, growing up in Hawaii & much more.

Troy shares how he put together the album, why it was important for him to give back to his community and family, his appreciation for his sister Chessa and how he played OPM music while on tour or in concert with some of the biggest stars in the world like Ariana Grande & Justin Bieber. His mom has met all of these stars that he has been musical director for but it was meeting Sharon Cuneta for the first time that impressed her.

While you're waiting for the full interview, check out some of the highlights from the chat with Troy and Nicole below!

1.  Nicole almost joined Black Eyed Peas as lead singer
When we first saw or heard about Ate Nicole, it was most likely because of the Pussycat Dolls. It was probably the first time we felt represented in mainstream media. However, before she became part of the girl group, she was in another girl group Eden Crush in early 2000s. Her group performed along with Black Eyed Peas and definitely tried to sing her way with the Black Eyed Peas before Fergie. Will.i.AM actually was interested in having Nicole as their lead. Nicole shares a story of when she used to sing by the Black Eyed Peas dressing room to get their attention. She says everything worked out in the end for everyone and now she’s excited to see another Filipina, J Rey Soul in the group.

2. Nicole looks up to Lea Salonga, Paula Abdul, and Mariah

She recognized that growing she didn’t have a lot of people to look up to. “There’s a lot more role models today, but there wasn’t that available before.” Even then, there wasn’t much diversity in mainstream media. Performers like Paula Abdul and Mariah she mentions were different looking, but people who remind her of herself.

3. Dream of hers to give back because it’s a part of who she is

It is Ate Nicole’s dream to give back which is a big part of who she is. Although she's not as versed in Tagalog like Troy, being part of the Kaibigan: A Troy Laureta OPM Collective, Vol. 1 project allowed her to represent and give back to her roots, her people, and ancestry. She mentions that she couldn’t have done Pangako without the help of Troy and Chessa since it’s her first time singing in Tagalog.

4. Growing up Hawaiian-Filipina shaped who she is now as a person

One thing you notice about Nicole is the pride she carries being a Filipina-Hawaiian descent. “It’s such a blessing because there’s not many Hawaiian-Filipinas out there.” However at an early age, she was raised in the mainland (usually what locals call continental U.S.) but would always go back home. She mentions that both cultures are similar in which the people have hearts of gold, loving people with rich cultures and heritages.

5. Troy chose Pangako for Nicole and it was her honor to sing it

We all know Ate Nicole is crazy talented, but she also has one of the most infectious energy. Like she mentioned, it’s a dream come true for her to sing in Tagalog and to do it with Troy Laureta who’s not only her musical director, but also friend. She admits that singing in Tagalog was a little intimidating but Troy and her sister Cheesa helped her through the process. She was grateful for their help as all she wanted was to do the song justice. We can say that she nailed it! Fun fact, she mentioned that the first person to congratulate her on the track was none other than apl.de.app!

6. Nicole geeked out when she first met Troy

When David Foster, yes the legendary David Foster was her music director, brought Nicole to one of Troy’s shows. Nicole was curious to see the talent who was David Foster’s music director. The experience she had watching Troy and the other singers perform was one of its kind. “I’ve never seen that kind of talent and voices that I had to know who arranged it.” Just like any of us, she fought her way backstage in hopes of introducing herself. It all came full circle as Troy is now her musical director and have been working together for a few years.

7, Troy asked Nicole to be part of Kaibigan project through a voice note

You know when you get nervous asking a friend for a favor and overthink it? Troy was definitely prepared for the whole situation with an hour long voice note. Troy said, “I was so nervous to ask Nicole because at that point we only knew each other for a year.” He had the idea to turn on spa music and left the voice. Nicole jokes that next time, he doesn’t have to ask her with an hour long, spa music message. She said she already considered him family and of course she wanted to do it. Please tell us the voice note is out there somewhere!

If you’ve seen her Instagram, she loves her food just like us! Count us in on going on food trips with Ate Nicole. She admits she doesn’t know a lot of Filipino food because of her Hawaiian background, but would love to be educated on it. Of course we had to mention classic dishes like chicken adobo. Troy even vouched to make it for her next time they meet. It’s time to crank the spa or dance music and get to planning the next potluck as she gave us the invite to her front door! DJ Marlino is down to bring the arroz caldo and bicol express while Roslynn is bring the dessert with Magnolia ice cream! Lets also get Kuya apl.de.app to bring the vegan Filipino food!

She remembers visiting the Philippines with the Pussycat Dolls and feeling like the Beatles with all the love they received. While the contrast to that was when she worked with UNICEF and visited again to work with the children on the street. She came from humble beginnings and reminds everyone that anything is possible. It’s her honor to be a voice and light for our backgrounds and ancestors.

Nicole leaves us with a valuable piece of advice, “Don’t forget who you are. God spent extra time on us Filipino blood. If you can really see it and believe it, dream it, it’ll happen and it’s possible.”

10. To round out the highlights from the interview, Nicole made one of DJ Marlino’s requests come true.

Before we let Troy and Nicole go, DJ Marlino asked if she could follow him on Instagram. Shoot your shot right? But now, we can say that Nicole Scherzinger follows the biggest Filipino hip-hop and R&B podcast in the world! While we’re here, don’t forget to also follow heavy rotation @heavyrotationfm on IG.

Excited for this MYXCLUSIVE interview to air soon. You'll discover things you never knew about the duo soon. Listen & stream Troy's Kaibigan album out now on all streaming platforms via Star Music.