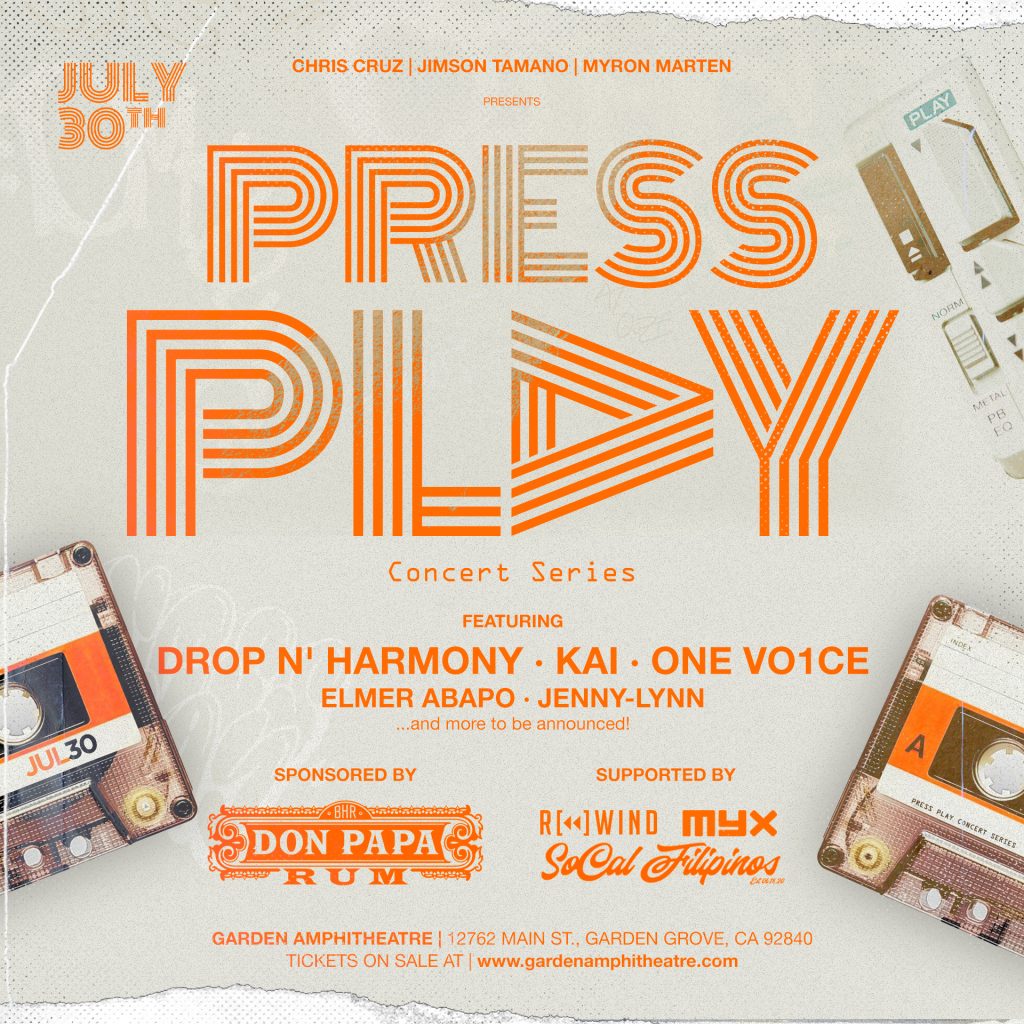 Filipino 90s R&B is back in a major way! Earlier this month, Anthony Presents & Jimson Tamano brought Filipino 90s R&B and Hip Hop back to it's birth place in the Bay Area for a SOLD-OUT Bring it Back concert at District Six. 800+ attendees sang along to their favorite R&B classics by Drop n Harmony, Errol & Rey of Kai, Pinay, Elmer Abapo & Dags while dining & shopping with local vendors in the unique concert space. Music was provided by legendary DJ Shortkut, hosted by Franboogie & Anthony Presents.

Due to the popular demand, a follow up all-ages "Press Play" concert, powered by Don Papa Rum on Saturday July 30 will be produced by SoCal's nightlife top event producers Myron Marten (World of Dance Co-Founder) and Chris Cruz alongside Jimson Tamano. DNH will perform alongside Kai and One Vo1ce. Get your tickets HERE on Ticketweb before they sell out. Limited early bird tickets avail for $20. Doors open at 4:30P.

See the highlight video from the past event below that includes a premiere performance of DNH's new single "Sweet November.":

In the year 2000, vocal group DnH burst onto the music scene with their debut effort, “Drop N Harmony”. The album spawned several notable songs including “My Friend” which was featured in the movie “The Debut”, the timeless love ballad “Because I Love You”, “Baby Go Bye Bye”, “Say That”, and of course the anthem, “Never No Never.”

Since that album, the group has stayed busy, continuing on with other musical endeavors: Dags (aka Darrel Seegmiller) recently released his solo debut, “Nu Ar Det Dags (Now Is The Time)”, leading off with the single “Cherry Blossom”. Sway (aka Sway Penala) followed up a successful run on American Idol with a solo album of his own in 2010, titled “My Story”. The album went on to make #1 on the iTunes charts in Japan, and top 100 in the United States.

Kai are an Asian-American R&B musical group from the San Francisco Bay Area, formed in 1992.

Originally named APEX, the group changed its name to Kai, an abbreviated version of the Tagalog word "kaibigan", which means "friend". They were signed to HB Records, a local studio and began working on an album. Their debut single, "Say You'll Stay" was released shortly after and received strong radio play. This helped them get signed by Geffen in 1997. In 1998, they released their self-titled debut album on Geffen, making them the second Filipino American recording artists to release an album on a major record label (Jocelyn Enriquez was the first, releasing Jocelyn on Tommy Boy Records in 1997). Their only charting single was the previously mentioned "Say You'll Stay" which reached #59 on the Billboard Hot 100. In that same year, they were also featured in an issue of Vibe Magazine alongside rap group The Mountain Brothers in an article promoting up-and-coming Asian American talent in the music industry.

In a similar fashion to other Filipino American recording artists, both of Kai's albums were recorded in English and also featured many covers of songs which were prominent in the 1970s and 1980s. Also in similar fashion to their peers, they were known to sing Tagalog covers at their live performances, as well as other popular English covers that were more recent.

Throughout their career, Kai also released exclusive songs not featured on their albums on various compilation albums. In 1998, "Last to Know" was featured on Serenade Volume 1, a compilation released by Filipino American record label Classified Records. Kai also contributed to two compilations (error) released by popular social networking website AsianAvenue.com. A version of "The Promise", which would later be modified before it became the title track of their second album, was released on AsianAvenue.com Plugged In Volume 1 in 1999 and a cover of Shai's "Come With Me" featuring Deviation was released on AsianAvenue.com Plugged In Volume 3 in 2001.

One Voice (styled as One Vo1ce) is a Filipino-American R&B girl group that originated from Vallejo, California. The group is known for their 1999 single When U Think About Me.

In summer 2009, after a five-year hiatus, One Voice decided to make their return into the music industry. They went back into the studio to record new music and began performing at various events. The group also announced the return of original member, Aimee Castillo. One Vo1ce appeared at the 15th Annual Filipino-American (Fil-Am) Friendship Celebration at the Serramonte Shopping Center, Daly City, CA on September 20, 2009. It was there where they revealed their new single, "Time To Live Your Life".

Aimee and Melissa would later leave the group and they would remain a trio. The group announced that they would release new material and have released a new single called “Passion,” on July 11, 2019. They sang the national anthem at the MYX & Sacramento Kings Filipino Heritage Night alongside performers P-Lo, Ruby Ibarra, MB Nel and SACBxY.

Reminder to get your tickets HERE on Ticketweb before they sell out. Limited early bird tickets avail for $20.