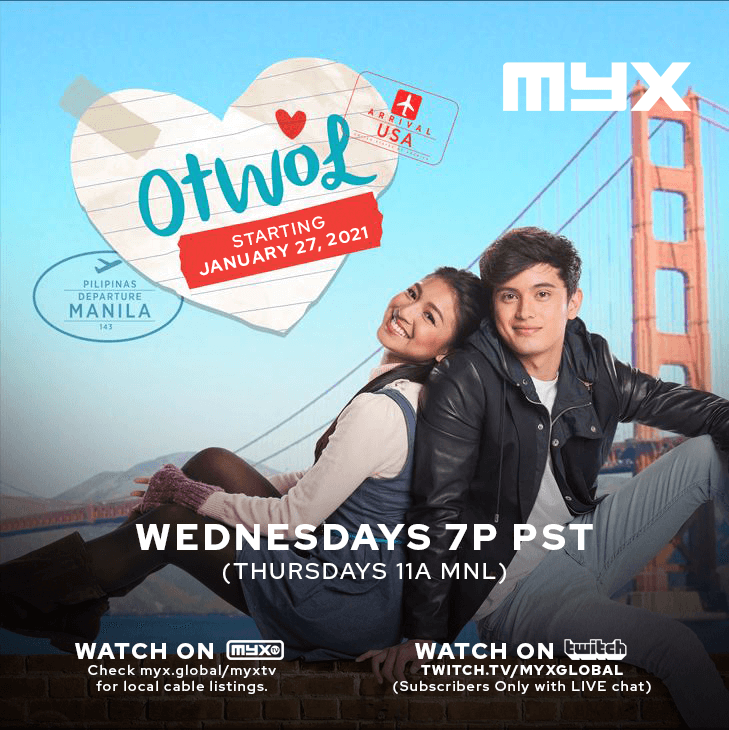 As announced in Variety today in their weekly international TV round up alongside HBO and Netflix new shows, On The Wings of Love was mentioned. The popular Filipino television series was edited & reimagined for global audiences, releasing on MYX TV cable/satellite network in the United States/Middle East & for MYXer subscribers to our global Twitch digital channel at twitch.tv/myxglobal.

On Twitch, once you are a MYX subscriber, you can watch the series weekly from around the world join a live chat with other subscribed fans while viewing. Join us to relive the kilig every Wednesday at 7P PST starting January 27 (Thursday 1/28 11A Manila) for 24 consecutive weeks.

Watch the exclusive trailer below, enter a trivia contest to win a one month subscription of our MYX Twitch channel on myx.global/otwol. Bookmark the page so you can stay up to date on future all things OTWOL on MYX!

Set in San Francisco, On The Wings of Love is the story of Leah Olivar (Nadine Lustre) and Clark Medina (James Reid) whose “meet-cute” ends disastrously. As her tourist visa expires, Leah is determined to stay in the United States to realize her American Dream and decides to pursue citizenship through marriage. But the only person available is… Clark, a Filipino American who has lived in the country for 11 years and the one person that makes her skin crawl. The two encounter challenges as a fake couple, but, over time, begins to develop fondness and true love for each other.

The original On The Wings of Love series premiered in 2015 and gained acclaim among fans in the Philippines. It concluded with an impressive 145-episode run in 2016 and has received numerous awards. The original 145 episodes were reimagined into a newly edited, faster-paced 24 episodes. It features the original all-star cast Nadine Lustre, James Reid, Cherry Pie Picache, Joel Torre, Nanette Inventor, and Isay Alvarez. The original score remains as well featuring artists Kyla, James Reid and Nadine, with newly added Star Music songs by Jayda, Morisette, Alex Gonzaga & KidWolf. New promos for the show on MYX will also feature music by international artists, Inigo Pascual & Kiana V.

ABS-CBN, the global leader in Filipino entertainment, has released numerous scripted television shows for over 50 years and this is the first time a series has been edited for a younger audience of both Filipino and non-Filipino viewers. The reimagined series provides a current perspective with relatable themes of immigration, family, and love. It is primarily in Filipino with English subtitles.

ABS-CBN hopes this release is one of the first steps for Filipino entertainment to join the ranks of Korean, Latino and Japanese shows which have helped bring Asian stories to the masses. Subscribers will be able to live chat with other fans across the world while watching the show on twitch. tv/myxglobal.

“ABS-CBN Global is committed to bringing premium Filipino content to the new audiences whenever they want and wherever they are,” says Jun Del Rosario, ABS-CBN Global Head of North America. “Our content is available on all major linear cable & satellite providers and digital platforms, which include proprietary channels like TFC and MYX.”

On The Wings of Love is being released under ABS-CBN’s entertainment brand MYX, which is geared toward a younger viewership across digital & linear platforms. MYX was launched in 2007 and is currently distributed across 20 MILLION homes in the United States. The brand recently relaunched with a larger digital footprint and is a key investment by the parent company to expand its reach in the United States & 2nd Gen audience globally. The premiere of On The Wings of Love will be MYX’s first time offering exclusive content and live chats to their subscribers on Twitch.

“We’re constantly challenging ourselves to evolve with the needs of our multicultural audience, which is why MYX’s premium Twitch channel has gained a lot of traction with our viewers,” says Roslynn Alba Cobarrubias, ABS-CBN Global Head of Music & Talent. “We recognize the importance of accessibility on every device with many of our shows and are innovating the ways we create with that in mind.” Variety also broke the news of the MYX re-launch last December.

ABS-CBN Global has made strides in recent months for Filipino representation in the mainstream with its co-production of Yellow Rose, which was released in theaters and digital platforms in North America last year by Sony Pictures. Among their successful MYX programming on Twitch include TAYO News, The Hub, Heavy Rotation, The Lunch Table, The OPM Hour, daily live DJ sets, artist exclusive interviews, charitable fundraising raids and MYX global premieres of new music.